Reflecting on her recent birthday.

Mike and Heather took me out to my foothills getaway last week, but I could tell from the get-go that things would not be the same on this trip. I knew it as soon as it took so long to get there, since roads were washed out by recent rains and nobody remembered to tell us about it. Heather had to backtrack and take additional winding roads to get us there. My stomach was a bit upset when we finally arrived, and then things got even worse. 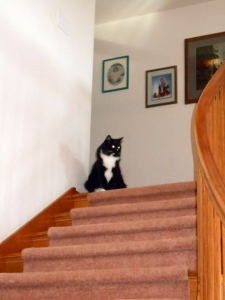 Mister Fuzz on the prowl.

Nobody consulted me about the major renovations going on inside, but renovations are well underway, and all of the bedrooms and bathrooms but one are in the midst of a major overhaul. That meant that all of us had to sleep in the same bedroom. And by ALL of us, I mean Mike, Heather, me, Smokey and Pumpkin , the two dogs who live there, and the cat, Mister Fuzz. (Luckily, Pepe the fat burro wasn’t in there with us.) True, I did have my own travel crate to myself, but I was constantly uncomfortable sleeping in such proximity to Mister Fuzz, who parked himself under the bed , not six feet away, and pretty much refused to come out as long as anyone was in the room.  Over the weekend, I had a few long-distance face-offs with Fuzz when he  dared to venture downstairs to eat, but we never tangled the whole time. Judging from how huge he has gotten, that was probably a good idea., but I felt yucky enough to be so near him at night. 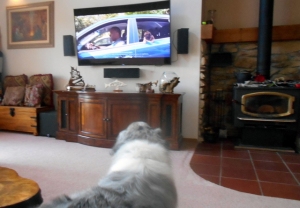 But Fuzz was much less a bother to me than that buttinski Australian shepherd Smokey, who was constantly in my face all weekend and doesn’t at all understand the word “No!” from man nor beast. I know he’s still a puppy, OK, but I began thinking he’s just not that smart.  He he barked at the TV screen whenever the Allstate commercial with Tina Fey and the Mayhem guy (Dean Gerard Winters) acting like he’s a Saint Bernard puppy was on. I kind of understood him barking at the real pug that appears in the commercial, but mostly he barked at the actor barking like a dog. Maybe Smokey identified with what the dog character labels “lack of impulse control.” I feel sorry for Pumpkin, who has to put up with Smokey’s goofball behavior every day.

The other thing about Smokey—and I really hate bringing this up—is his pooping prowess. Smokey rings a bell when he has to go out. Cute, very cute. What’s not so cute is how much Smokey poops: It could be three or four times on each walk, with three or four puny poops each time, one at a time, usually with a few steps in between. I kid you not. And poor Heather, walking behind him with multiple poop bags, trying to keep track of where his last deposit landed while bending down to scoop the previous one. On our last long walk of the weekend on the Preston-Snoqualmie Trail, my pity for Heather intensified, as poop got caught in Smokey’s ample butt fur and Heather tried to clean it off with a handful of fallen leaf residue. I tried to get Mike to take a picture, but he declined. 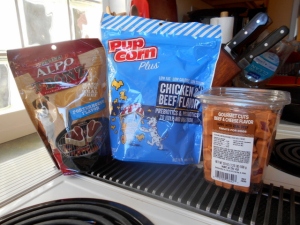 Anyway, for the first time ever I  was happy to get away from the getaway when we packed up and left  on Monday morning, and even happier when I got home and a package arrived from Syracuse. It was actually addressed to Mike and Heather, who were celebrating an anniversary of something or other, but the same box from my aunt Susi also contained a fine selection of gourmet treats for me. I’m glad someone thinks I deserved something special for my recent 10th  birthday, and these are exactly the kind of special, expensive, calorie-laden treats that Mike and Heather would never buy for me. Thanks, aunts Susie and Debby; I’m sure these highly appreciated and anticipated treats will be doled out prudently (with Mike in charge, my heirs might be enjoying them someday—if I had any heirs, that is). And thanks also to Cleo and Bear, my aunts’ cats, who sent me a nice birthday card in the same package. I must caution them, however, that while I may have reached a certain level of detente with Mister Fuzz, when I reach Syracuse this summer I will still look forward to chasing them. Start training and be ready.