Chloë Injured in the Line of Duty 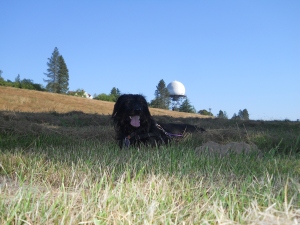 Returning to the scene of the crime.

I could tell from well down the hill that this dog would be trouble. I tried to pull Mike in another direction, but we were on a narrow trail near the top of the South Meadow, and the dog was standing right next to our path. His person sat to his left, holding his leash.  He wasn’t that big, but I wanted no part of him, going as far to my left as I could, so Mike was between me and the other dog. He was actually cute, in a Benji kind of way, and Mike thought he was harmless, so he spoke to the dog, told him we were nice guys, and extended his palm for sniffing.

That move backfired, however, as the dog lunged at Mike and barked. I yanked Mike in the opposite direction to save him (and get out of the way myself), but as I dug in my paws, a sharp shard of rock shot up into the bottom of my foot and up between my toes. While the barking dog’s owner mumbled apologies, I hustled Mike up the trail to where it intersects with the paved park road. Only when I knew we were in the clear did the pain hit me, and from that point I limped home, hurting every time I put my front right foot down. Mike stopped to check my paw a couple of times, but there wasn’t much he could see or do. I stumbled home.

Heather tried to remove the shard using her high-powered flashlight and  tweezers, but to no avail. When she still couldn’t get it out the next morning, it was off to see Dr. Kimmel, my personal physician. After she examined my paw, she sent me right to the dreaded Back Room, where all the really nasty stuff takes place. Plied with many treats, however, I held my squeals to a minimum, and the sharp little prick finally came out, making me feel better immediately.

Luckily, I didn’t need stitches or even a bandage. The only special instruction Dr. Kimmel gave Heather was to cover my paw when we walked in the park, so dirt didn’t get up between my toes. Heather disdained bandaging it, opting instead for fastening an old sock from her rag bin around my right front paw with rubber bands. I wore it on our walks for three days, but on the third day it fell off and dropped somewhere along our path. Maybe some dorky rodent found it and used it for nesting material, but I didn’t care. I was about done with it, anyway.

2 responses to “Chloë Injured in the Line of Duty”