Chloë Takes a Puppy to School

I was excited to to return to my mountain getaway in east King County last week. As soon as we exited I-90 and climbed into to the foothills, I knew where we were going, back to the palace of wall-to-wall carpet and lawns galore. It’s my absolutely favorite place to play fetch, 50 or more throws at each session. And I love being the undisputed leader of the pack with Pumpkin, the little dog who lives there, and the mysterious Mr. Fuzz, the bushy cat who mostly stays upstairs when I’m around. They know their place.

Unfortunately, sometime after our last visit, Smokey showed up. About 8 months old when we arrived, Smokey is the successor to Tara, the brilliant Aussie who showed me the ropes out here when I was a but a wee pup. Supposedly it was my turn to pass some wisdom on to Smokey, except for one thing: Smokey just didn’t want to listen. Every single time he could, he just wanted to bite me on the ears or stick his nose up my butt, like I was going to smell different every time. Heather yelled, “Leave!” and “No” more than I’ve ever heard them yelled before, even in my own frolicking puppyhood. Heather was worn out after a week of grappling on the other end of a leash with Smokey, a strong and growing boy.

Chloe and Smokey rest on the trail.

Heather said Smokey hadn’t been out much beyond the grounds of his home property. He didn’t know anything about taking a walk, so we taught him how to do it, and we walked on the Preston-Snoqualmie and the Snoqualmie Valley trails. By the end of our time there, he was getting better at following the pack, although he kept trying to pick up large sticks at the end instead of in the middle, and he turned out to be a serial pooper, meaning he took several long strides between each deposit, so it was hard to know when he was done and harder to find those nuggets when he was. Heather needed a lot of bags. And she also had to teach Smokey about how to ride in the back of the car, although it took a lot of pushing and shoving from Heather and Mike in the front seat to keep him there. On the plus side, since Smokey had to be by himself in the back seat tied to my harness, I finally regained my rightful place in the front seat in Mike’s lap. Good timing, too; in this comfortable spot I could lay my head down, close my eyes, and not think about the twisty roads we were driving on, which make me queasy. 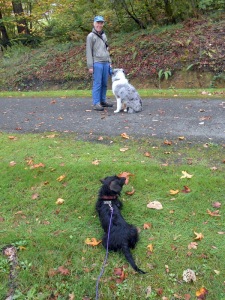 Heather tried valiantly to teach Smokey better manners, but even a week in Heather’s infamous Boot Camp could not make much difference. Hopefully Smokey will grow out of his rambunctiousness and be a nice guy to be around, but at this time he’s still a work in progress. While we were in the house, he mostly had to stay in his exercise pen in the living room, just to keep him out of everyone’s face and give Pumpkin and I some respite from his constant advances. We all felt sorry for Pumpkin, because when no one is around to tell Smokey “no,” he will hound her constantly and drive her into her crate or onto seats of chairs that are pushed in under the dining room table, where she crawls up in her little lair and hopes he doesn’t find her. 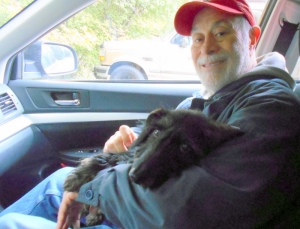 Anyway, I missed out on the other Big Excitement of our week at the getaway. I was inside the house with Mike in the middle of the afternoon when Heather took Pumpkin and Smokey outside for some exercise. She threw the ball for Smokey (and he was making some progress on bringing it back!) while Pumpkin ran unleashed in in the horse ring until Heather saw a cougar standing at the edge of the property, on a trail that goes into the state forest land out back. She yanked on Smokey’s leash, called Pumpkin to come and hightailed it with them to the house, while the cougar hightailed it in the opposite direction.

It was a good thing that I didn’t happen to be out there fetching my ball on the back lawn when that big cat appeared. Everyone knows how much I love to chase cats. It could have been good practice for the Bartons’ cats down the street., and no one doubts I would have been deterred by its size.

Although I missed that opportunity, and sometimes Smokey got to be a bit intimidating, it was a worthwhile time out there. It made Heather appreciate much more just what a good dog I am. And as I always like to say, better him than me.

3 responses to “Chloë Takes a Puppy to School”