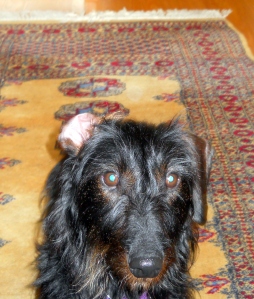 Nothing big happened in the week Lynn stayed with me.  By Sunday, most sidewalks in our neighborhood were clear of last week’s snow and ice, but it was still pretty cold. We suffered through a few nights of noisy wind; I could hear tree branches snapping and garbage can lids and recycling containers flying around or flapping  up and down. It got so windy one night that Claire’s empty compost bin blew all the way across the street and landed on the sidewalk beside Heather’s car. I heard it rolling.  That night our lights kept flickering, but power never went out, thank goodness. (Although if we got into a real emergency I have the utmost confidence in Lynn; more than I have in Mike, frankly.)

I had fun (and lots of treats) with Lynn, but when Mike and Heather got home I went crazy for them, anyway. After all, I know where my bread is buttered 50 weeks a year (more or less).  So I pretended to like them when they got back even more than I did when they left. This little act will insure more favorable treatment for me in the long run.

The next afternoon all three of us went for a two-hour hike all around the park, and on Monday Mike and I played fetch with my purple-and-white ball in the lower part of the park for a real long time. In fact, a lady who was walking by marveled not only at my cuteness (as is the norm, of course) but of my speed! I was flattered, but I still wouldn’t let her pet me.

Then, just as it was getting dark. I suddenly veered off the park road for an instant and then re-emerged, limping. I had gone into a premeditated “sympathy routine” that I had devised while Mike and Heather were away.  I was merely pretending to  be limping, and I must have been playing my part well. Mike ran over to me quickly, kneeled down and thoroughly checked my right front foot and leg, feeling carefully between my toes and my joints. I let him handle me with no fuss– but when he couldn’t find anything amiss and asked me to walk,  I made myself stumble badly. Then Mike got genuinely worried. He briefly considered his options and, just as I had hoped, decided to carry me all the way from where we were (near the park Visitors’ Center) all the way to our house, probably about a mile and pretty much all uphill.

I could tell immediately that the leg that’s been giving Mike trouble for  a long time was bothering him every step of the way, so I was feeling a little guilty,  and I tried not to fidget around so much.  Actually, I kind of liked being carried around; I felt kind of like Liz Taylor in Cleopatra.

Chloë and Mr. Monkey wrestle in front of crate.

But when we got near the park entrance and started to cross the street to our house, I spied the Macs–MacDuff and MacKenzie, my Bichon friends from down our street–trotting toward us. Great, I thought; I hadn’t had any opportunity to torment them in a couple of weeks at least! Just seeing them made me wiggle so demonstrably that Mike was obliged to kneel to the ground and put me on the sidewalk, and I sprinted the last 20 feet or so to intercept them. They are such wimps–I really enjoy making them miserable for a few seconds.

So, with my cover blown, I decided to forego the charade any longer (at least for now), and I proceeded to act and walk normally for the rest of the day, and the next day I showed no signs of lameness, causing Mike to wonder what made me limp the day before. In the afternoon I played fetch with Mike for about a half-hour straight , and then capped the day by chasing  a bunny into a thicket of Scotch broom. Mike had to crawl in and drag me out by my harness. I have to admit that I’m glad he did, or I’d probably still be out there in another cold, dark and rainy night. My sleeping crate with blankets and Mr. Monkey is sure preferable to that.

So I guess you could say things are back to normal, at least for the time being.

First off, don’t sweat it if you don’t know how to make an umlaut on your computer.  I’m a dog of the common person. 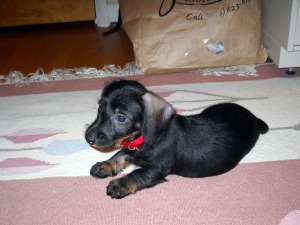 When you write my name, the umlaut is optional. If you even know what an umlaut is.

About the name. No, I’m not named after some Germanic femme fatale, but after Chloe O’Brian, Mike’s and Heather’s favorite character on 24 (just before it was cancelled, too!).  Hopefully, I won’t get her infamous pussface, just her name.  Come on–is this a pussface?  Besides, you should have heard some of the other suggestions. Umlaut? That’s not a good dog name. Huggs? Pittsnogle? Where’s all this West Virginia stuff coming from? (By the way, my NCAA baksetball bracket tied Mike’s and beat Heather’s, and I didn’t even get to see any games before I picked; just wait ’til next year!)

So call me Chloë. I was born on Feb.5, 2010, in Monroe, Wash. My mom, Banshee, lives there.  There were four brothers and three sisters still there when I left, but they won’t be there for long.  All the boys are already spoken for, and the breeder (who is a vet in Kirkland, Wash.) is active in Earthdog, where dachshunds and other small breeds go through modern field trials.  She’s bringing the rest of my sisters to the next meet, and she’s trying to talk Mike and Heather into bringing me along to see what it’s like.  That’s OK, as long as I get to go home with them. I’ve only been here since Sunday, but I can already tell I’m going to like it fine, once we work out some of the kinks.

In fact , I’ve heard Mike and Heather say several times that things are going OK (I even heard Heather tell Mike that I’m smart!).  True, there have  been a few “accidents” (it’s always their fault, though), and a little whining here and there.  Even at 2, 2:30 in the morning.  But really, nobody can expect a saint from Day One. Right?

That’s about it for now.  I’m already getting tired, and this crate thing, which seemed so awful at first, is starting to feel kind of comfy to me.  Who says writing’s not hard work? But there are perks, of course. Mike told me if this gig works out, I could be bigger than that E-Trade baby.

Here are a few more shots of my first week in the big city. Stay tuned right here for more.

Mikey and Chloë at 7 Weeks 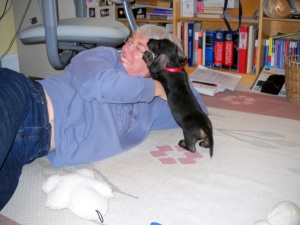