Chloë Gets on the Wall

So far, it’s been a very good year. My dog pal Penny came over for a visit during a Syracuse basketball game, and everybody here got very excited when the game was over. You don’t beat #1 too often, they said. Good, I replied; more treats for me! Penny even left some of her treats here, which I welcomed and scarfed down. 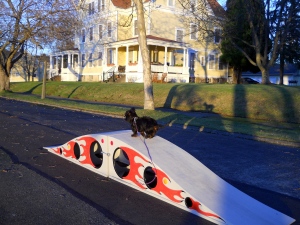 Chloë on the ramp

I also got extra treats from Mike when I successfully traversed the skateboard ramp up by the military housing. It was scary at first, but after a couple of times it got to be second nature, and soon I didn’t even need the bribes. Even without a skateboard, it’s fun. Heather told Mike she doesn’t like me using private property, but what can I say? When I’m with Mike, I’m just a rebellious teenager out for a good time. 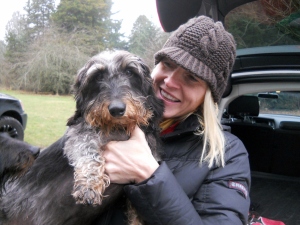 Last week Frank and Stanley came over for a walk. They each tried to beat up on me a little, but I steered clear of any of that 2-on-1 stuff. I don’t want those two loads rolling on top of me at the same time. They must be pushing 70 pounds between them! I might be crushed. So we mostly walked around the park, chased balls a little  and sniffed around. It was fun, as usual, but not the raucous good time it used to be. Are we already getting old?

But the big news: I guess this makes it official, like the Presidential Inaugural: Mike and Heather put a framed photo of me (with them, taken by my Uncle Bill) on the wall outside the bathroom, where Heidi’s picture already was. So I am  officially a permanent member, er leader, of this pack. Even if they get rid of me tomorrow, my photo will be there forever…or at least the outline of where it was. And above the great, great, Heidi, for crying out loud.

Now I feel I have truly arrived. 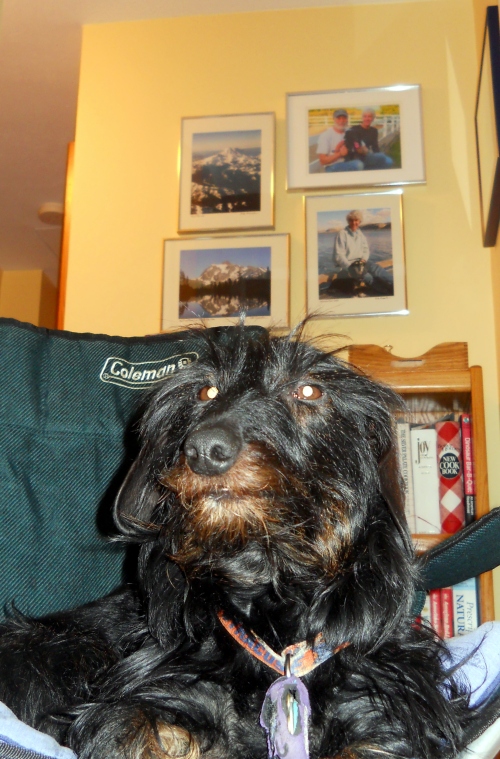 Chloë in front of gallery

This entry was posted in A Dog's Life. Bookmark the permalink.

3 responses to “Chloë Gets on the Wall”