I just don’t like anyone or anything walking behind me. Makes me nervous. I slow down, slink to the side of the trail, plop on the ground, avert my eyes from whatever’s sneaking up on me. I don’t like surprises. I let them pass, and then I’ll start walking again. That’s just the way I am.

While this has always been among my idiosyncrasies, during the recent stays of my house guests Willy and Schatzi, this reaction became more frequent. That’s because whenever I go for a walk with another dog, I can’t be the one leading the way. If I did, there would be someone behind me. And I couldn’t tolerate that. 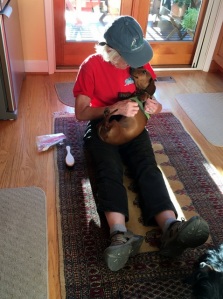 Schatzi gets groomed during her recent spa visit.

So when Mike was holding my leash, Heather walked ahead with Willy or Schatzi. Those younger dogs are faster walkers than I am, anyway. Since neither Mike nor I walk very fast these days, Heather and the other dog sometimes got too far ahead, so I couldn’t see them. I didn’t like that, either.

After first Willy and then Schatzi left our house, we reverted to our walking ways since last September, when Mike had back surgery and ceded the leash and other care responsibilities to Heather while he was rehabbing, which must still be in progress, since Heather has shown no signs of relinquishing the reins. 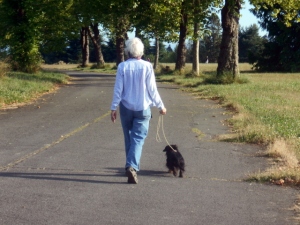 Staying ahead of the curve.

As far as our daily walks go, that means Heather leashing me to her belt with a carabiner and dragging me along at the speed she desires, not the slowpoke pace Mike lets me get away with. Thus she and I usually walk a good 25 yards ahead of Mike, still clicking along valiantly with his trekking poles. That’s enough distance that I can accept Mike walking behind me. But I wouldn’t want him to get any closer.

This entry was posted in A Dog's Life, Chloë's Excellent Adventures and tagged wirehair dachshund. Bookmark the permalink.

One response to “Chloë Walks Behind”