I know it’s hard to envision me as a role model for anyone. I see myself more as a Charles Barkley, don’t-call-me-a-role-model type. But Merrie, the Basset hound who lives down my street, really needs my help if she is ever going to mature into a well-behaved, well-rounded dog. When they put it that way, I just couldn’t say no. So Heather and I and Merrie and her owner Jane all went to the park one morning for our first lesson. We ran around, and they did a lot of talking. I thought it went well, but I could see there’s a lot of work left to do.

Learning a thing or two.

Merrie wants to romp around and play with other dogs, but she doesn’t understand how to do it. When she was young, she never got socialized with other pups like I did in my puppy kindergarten.  Now, as an adult, Merrie is big, but she doesn’t know her own strength. Dealing with her girth is fine when she and I are just running around on the parade ground, but when she wants to pounce and sit on me, that’s not OK, and I had to let her know it.. I could have nipped at her and bared my teeth, but I figured if I just rolled over on my back and showed her my belly, she would get that same message in a gentler way. It worked, too.

Moving forward, if I can just get Merrie to reign in her enthusiasm a little, we’ll be good together as frolickers for years to come. Heather and I plan to resume her lessons as soon as we return from summer vacation. We all have too many things to do before we leave to make any real progress at this point. Baby steps. 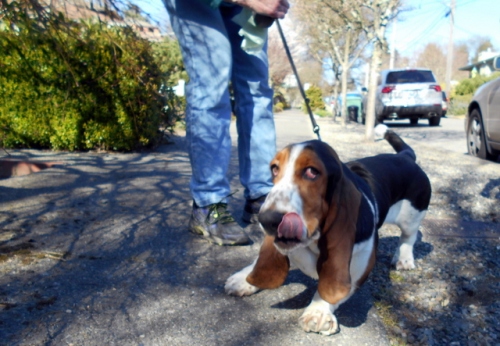 When I first met Merrie, the Basset hound puppy who lives down the block, I easily outweighed her. Now, barely six months old, Merrie outweighs me by at least 3-to-1. She’s a big girl. She’s friendly enough, and she clearly wants to be my buddy. I’m not rude to her exactly, just indifferent. She’s got way too much puppy energy for me. 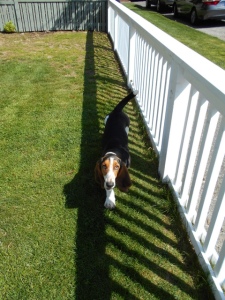 Merrie in Her Yard

But I’ve got to at least tolerate her for two reasons. First, she’s not going away. Now that the weather’s good, she is frequently in the front yard of her house when Mike and I walk around the block in the morning, so we see her a lot more often. Second, I’m embarrassed that I’ve apparently been spelling her name incorrectly ever since she got here.  I guess I should have checked instead of just assuming she used the common spelling. Surely, any name that contains an umlaut certainly can’t complain about someone demanding special spelling.

In reality, I am jealous of Merrie. Not because of all the attention she gets from Mike and Heather whenever we see her outside.  After all, she’s cute; she’s still a puppy,  I get it. Even I, cute as I am, was cuter as a puppy (I can tell because strangers don’t say it nearly as often.) I don’t even mind it when Mike gives Merrie treats from my treat bag. I always get one, too. I’m just envious of the great stuff that Merrie has that I don’t.

A fenced-in yard, for instance. On sunny days, Merrie gets to sit outside with no leash or collar, wandering from the front of the house to the back, from sun to shade and back as she chooses. And she lies down on a real lawn, too. We have no lawn at our house.

Know what else she has? Sometimes we see Merrie inside her living room through the big bay window, where she lies on a big, stuffed wing chair, her head on the armrest, looking out at us. At my house, I have no such chair to call my own, no designated perch where I can peer out a window and keep a lookout for the UPS truck, the mailman and Heather’s car. Unless it’s summer, when the front door is open behind the sliding screen, I have no way to see outside. I feel deprived.

I just don’t get it. I can trounce  Merrie in a running race, find and fetch a ball quicker than she can, and I’m surely a lot easier to feed and clean up after. So how come she wound up with all of my coveted prizes?

Even though I try to ignore Merrie when we meet on the sidewalk or across her fence, her arrival has provided me with a focused list of demands: A fenced yard, a lawn, an overstuffed chair with armrest, and a picture window. It’s only fair. When negotiating, I like to stake out a hard line, so I’m putting myself into position below. I plan to block this trail and refuse to fetch any balls until my demands are met.

Major excitement last week: Our rumored new neighbor of the canine variety finally arrived. Jane from down our block, owner of the late, lamented Grace, brought her new Basset hound puppy, Merry, home from Port Orchard, which is on the other side of the Sound. Merry is supposed to be the smallest of the litter of four girls, but she already looked pretty hefty to me when she and Jane toddled over for a meet-and-greet on a recent Sunday afternoon. Merry will outweigh me in a week or two, and that could cause problems. Grace never gave me any problems, but a puppy might.

Merry, after all, was visiting MY turf. I let her sniff me a little so she didn’t think I was hostile, but I wasn’t about to get friendly with her. Not yet, anyway. 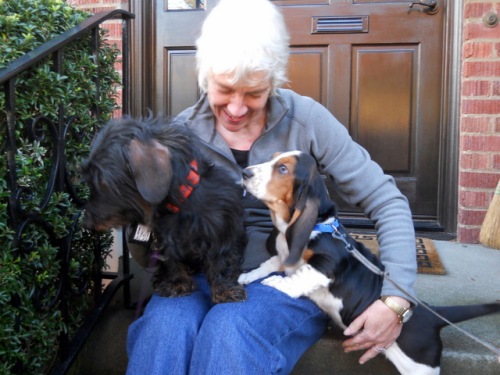 Pretending that  no other dog is there.

I foresee bad things happening. Already, Merry and I had a short standoff over food.

There are also potential conflicts about Heather’s affection. Mike’s affection she can have any time she wants, as long as I can still bite his nose once in a while. 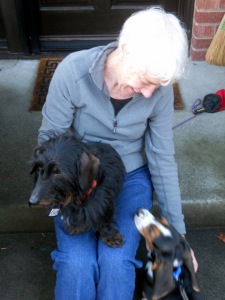 At the end of Merry’s first visit, I suppose you could say we reached a standoff.

Maybe once I get used to Merry and figure out that she’s always going to be leaving with Jane, I can stop feeling threatened by her and start to give her some positive mentoring about the neighborhood.  You know, cats, raccoons, the UPS guy, good spots in the park; there are many ropes to be shown. If we run out, Heather and Merry have already been thinking of some more.

Resting on another boring walk with Heather

Mike went away for a few days, for a football game, but Heather stayed home because of work deadlines. I went to her office a few times, as I usually do, but not much was going on there. Sheila was the only other dog around, and I’m always more excited to see her than she is to see me. I hung out next to Heather’s desk and went to several meetings, all of them without incident, and attended a retirement party that yielded a few tears and a lot of pizza boxes but no extra toppings hitting the floor.

But one of the days, Heather had to go to Vancouver (the one in British Columbia, that is) for a meeting, and I had to stay home. Fearing I would be left alone too long (and with terrorists on the loose in Canada!), Heather called in the troops. Our neighbor Jane, owner of the late, great Gracie, came over to walk me in the morning. Jane will soon be getting a female Basset hound puppy, so I guess she felt she needed some dog-walking practice to get back in the swing of it. Jane kept telling me to hurry up, but I stubbornly refused to pee for her. She still has a thing or two to learn about command tone, I’m afraid. Later, though, I felt bad about exposing her to failure. I hope she didn’t take it personally. She’s a nice lady.

Later that afternoon my best friend Lynn came over to stay with me for a few hours, take a walk with me and make my dinner, and I was relieved when she arrived. Not only was I happy to see her, but it alleviated my concern that if Jane had returned for a longer walk and my feeding, she wouldn’t know the correct ingredients for my dinner and I wouldn’t get enough. Lynn knows, however. Lynn knows everything. Unfortunately, sometimes Lynn knows me too well, and she can easily tell when I’m trying to con her. If I park myself in the kitchen or in front of the downstairs TV to silently scream that I’m ready for a reward (come on, Mike does it!), I never wring more than a tug toy or an affectionate ear rub out of Lynn. She speaks softly, but she’s tough.

One fun afternoon with Lynn wasn’t worth all that time without Mike, though. After all, I lost a lot of nap time by going to work with Heather, between the long commute in Heather’s car and sitting awake all day in my blue-chair guardhouse, defending her desk . Managing her office is challenging, and then at the end of the day the two of us had to head home to an empty house. Worse yet, every night the harried Heather picked up takeout food on our drive home, and then I had to sit on the front seat, tortured by those unreachable aromas the rest of the way home. All I got out of it was a little extra broth on my food and an empty container to lick out later. Big whoop.

It was kind of sad around here with Mike gone. He can be a major pain in the ass, of course, but I was glad to have him home. 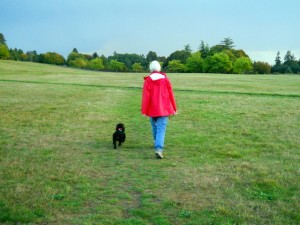 My friend Gracie died. It was sad, but not surprising. Grace had been getting cancer treatments for years. She didn’t get out much anymore, but it was still a joy to see her. From the time I was a puppy, I always got excited when I saw Gracie, she was my first role model, one hound to another. I will miss her dearly. I didn’t know her Basset companion Sophie, who died before I arrived on the scene, but now they can be reunited in doggie heaven and resume admiring each other’s flowers, a signature  of their wardrobes.

Meanwhile, this leaves only four dogs on my block: next-door neighbor Grace the labradoodle, April the border collie ball chaser with two cats, Poncho the American Eskimo, the housemate of the late Gracie, and me, Queen Chloë the First. Not exactly a powerful posse to back up my fight against an ever-increasing number of cats and children in our environs. In fact, children on our block now outnumber dogs, 5 to 4, which is downright anti-Seattle.

I heard Gracie’s owner Jane tell Mike she wouldn’t be getting another dog, and no way that the people who own the house next door to us are bringing any dogs with them when (or if) they ever move in. I have one more chance: There’s still a house for sale in the middle of the block. In memory of Gracie, please let the buyers be dog lovers.