Dog walk on the rooftop deck.

Quarantine marches on, pretty much every day the same. My big highlight of the week was when Heather spilled yogurt on the kitchen floor and I got to lick it up. That’s what passes for excitement these days.

Maybe things are loosening up somewhat. While my favorite ladies Jeré and Channon, our house cleaners, haven’t returned yet, apparently some other restrictions will be easing. More parks will be opening, so maybe we’ll be able to take a drive and walk somewhere other than Discovery Park.  I know Mike is worried about never driving his car, and I’m looking forward to a changes of scents as well as seasons, so it would be a win-win situation.

I enjoyed a bit more social interaction already. One day we went for a walk with my friends from Juneau, George and Debbie, who are staying in Seattle while George goes to doctors and gets treatments. It was a sunny afternoon, but instead of going to a park, we walked near their apartment building, crossing city streets and sidewalks that were mostly empty, and then through tunnels, across bridges and down stairways amid tall buildings downtown. Places like this are normally crowded,  not my cup of tea, but in today’s world we were the only ones there. 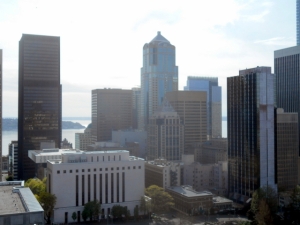 Then we went back to the rooftop deck of the building where George and Debbie are living, and I tried out the private pet walkway on the east side. That was fun, but then all there was to do was lie around in the sun while the four of them chit-chatted away about such scintillating topics as how many new tricks  George’s dog Yankee has learned lately. (Playing dead? Big deal! What has he written?)  They even took off their face masks to drink beer. and I’m calling them out for doing it. 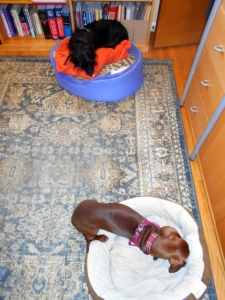 Chloë and Schatzi devour Frozen PBBs in their respective beds.

Later in the week, even though Heather was already aware that social distancing is in force for dogs as well as people, my young friend Schatzi paid us a visit.  Caroline didn’t come into our house when she dropped her off, but Schatzi stayed several hours, and as soon as  she hit the door, social distancing went out the window. Mike was downstairs exercising when she arrived, but he came running up because he mistook the pounding of our eight tiny paws on the floor for an earthquake. I let her go for a while, but soon set limits so I could get Schatzi  interested in more important stuff, like scarfing up frozen PBBs (I let her have a small one), napping in camp chairs, napping in bed with Heather, and going for a long walk in the park. Although Schatzi didn’t even stay for dinner, I’m sure she was tuckered out when she got home. So was I. 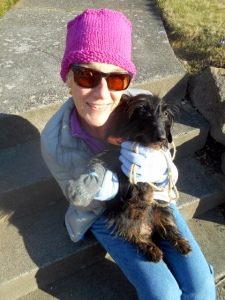 Chloë shows off her protective sock

The pain from my recent injury didn’t last long. As you can see from the video above, within a couple of days I ditched the protective sock (shown in the photo) and got back to running around as usual, even romping in the cemetery with my little buddy Schatzi.

Just a few days later, Mike and Heather went away again (!), so I went over to Schatzi’s house for another staycation. Just like last time, I took over all of her toys (hers are much better than mine), and we played a lot of Bed Bingo, when Schatzi occupies my bed and I take over hers. Observing proper social distancing, we did not sleep in the same bed together, and for the most part we dined separately, although there was one night when Schatzi tried to get at my food, and I had to growl at her.

Something was different about this visit, however. Schatzi, who just turned one year old, went into heat for the first time a few days before I got there. Since I had been spayed when I was just six months old (Heather being a  staunch supporter of Planned Parenthood), I wasn’t able to offer my young pal any first-dog advice on what to expect or how to deal with it, but I was able to perform a crucial function nonetheless: Guarding her against any slobbering male dogs who might be hanging around the property, drooling over my fruitful friend. Marley from across the street seemed to be sniffing around more than usual, but after I gave him a hard stare, he kept his distance. I must have done a good job while I was there, because when I left the premises, Schatzi’s virginity was intact. Not on my watch, boys! 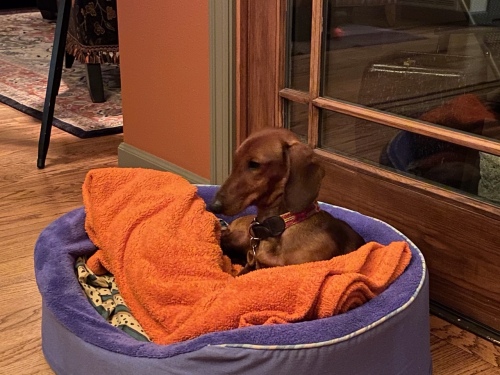 Schatzi contemplates her life in her idol’s bed.

Listening intently on the trading floor.

The other highlight of my stay was going to Caroline’s financial adviser office in Magnolia Village. Everyone there is always so nice to Schatzi and me, even at this difficult, frenzied time when the stock market was crashing all around them!  Still, just by sitting in her office for a little while, I was able to pick up some valuable insight about what to do with my portfolio. Unlike certain members of the U.S. Senate,  however, I have resisted the urge to cash in on my inside knowledge. But Schatzi, with her reckless youth and feelings of  invincibility, may not be so inclined. As our illustrious president likes to say, we’ll see what happens. 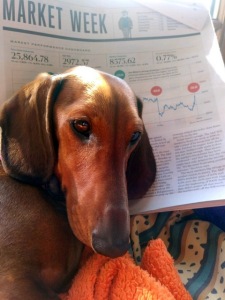 Schatzi soaks in the financial news.

Just a day after Mike and Heather returned from their trip, my aunt Sammy came to visit. She was here to listen to some poet she follows, so we didn’t get to hang out with her as much as I usual. But her visit still paid off, as she and Heather made a macaroni and cheese recipe that provided excellent plate-licking material for a good week after she left. I would have preferred an encore, but she left anyway. 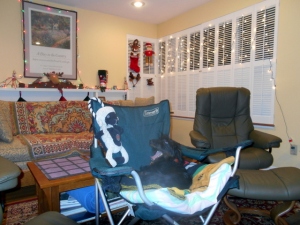 Mike finally got around to hauling up the holiday decorations from the garage, and he was very proud of himself for expanding the number of lights and areas covered. Heather installed permanent hooks for our stockings under the mantel, so they will hold more weight, which is always a good thing as far as I’m concerned. However, seeing my favorite singing Rudolph the Red-Nosed Reindeer hanging high in a corner where I couldn’t get close enough to lust after it did not sit well with me. I gave the decorations a big yawn (see photo).

Stocking up on rawhide

My mood brightened on Christmas Day, especially when my stocking was unloaded (on the couch no less, where I am never allowed except on very special occasions) with assorted treats and toys from my Syracuse aunts Susie and Debby, including rawhide sticks that look and taste like candy canes. I haven’t had much rawhide since my titanium crown was installed, so I particularly treasured these treats. After I unloaded my stocking it was Heather’s turn, and she got several different kinds of chocolate, which of course she won’t be sharing with me because chocolate can be deadly to dogs. Even I know that!

Finally, it was Mike’s turn, and guess what was in his stocking? Nothing but coal! Two lumps! I guess we know who hadn’t been nice enough to the girls around here.

My best gift this Christmas came from my new best dog friend Schatzi, who came over to visit on Christmas Eve and brought me a holiday gingerbread house stuffed with squeaky toys: a gingerbread man, a Christmas tree and a candy cane. It’s lots of fun to pull all the squeaky toys out of the gingerbread house and leave them around the floor so Mike can lean down, grumble, pick them up and stuff them inside the little house again. The house is good for tugging, too, and I’m making sure that Mike knows it.

Anyhow, Schatzi has her own gingerbread house over at her place, so we quickly got bored with my present and started wrestling instead. I’ll get back to the present it when she goes home.