We’re finally rolling on our cross-Canada journey. First stop was Omak in Central Washington (more on that in a later post!) before crossing the border into British Columbia. We had to surrender two Washington apples at customs, which pained me, because the nice guard would have let us eat them at the customs station, and I would have gladly complied, if given the chance and if Mike had cut them into little pieces for me. A missed opportunity.

Our first Canadian stop was Heather’s niece Rhiannon’s wedding. Not too exciting for me, however, since I had to view the festivities from my crate during the back yard ceremony and in the car during the reception that followed. And that’s too bad, since the harpist who was supposed to perform was delayed, and I could have entertained the guests instead. Another missed opportunity!! 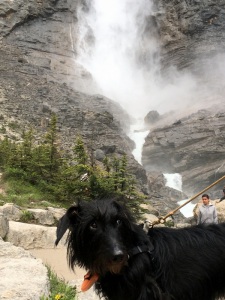 Wipe that waterfall spray off my head, please!

As we pushed through the Canadian Rockies and the prairie provinces, however, I did get my chances to entertain. At nearly every stop when we got out of the car for a walk or an exploratory excursion, people who saw me )paused for a smile, a chuckle or a laugh. Apparently Canadians had never seen anything like me! Many stopped to comment on how cute I am (a given), my distinctive gait (some called it a “waddle,” but Heather quickly corrected them: “It’s a joyful prance!”). Sometimes they wanted to know what breed I am, and Heather gladly expounded upon the variety of dachshund available, from smooth to longhair to wirehair and piebald (kind of a pinto dachshund). They were grateful for the knowledge, even as I tried to fend off their attention, being as modest as I am! I let Heather do my talking for me. 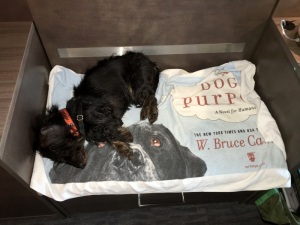 All this traveling is tiring, however. I don’t do much sleeping in the car, since I have to keep a constant watch for speed traps, ice cream drive-ins and the like. Or just sticking my nose, and sometimes half my body, out the rear window to soak in all that clean Canadian air and scents. Lots of fine smells in Canada, although the stench of the pulp and paper mills isn’t one of them. Besides, some of the walks that we took were long, hot and physically exhausting. My favorite day of the trip so far was a rainy day near Riding Mountain National Park in Manitoba, when Heather went out to do their laundry, and I stayed with Mike in the air-conditioned motel room. It was my chance to catch up on some well deserved shuteye, and I enjoyed taking full advantage.

2 responses to “Chloë Entertains the Tourists”