Along the Mount Baker Highway,

You saw the headline, and I know what you were probably thinking: Nasty Mike blew smoke from some of that wacky tabacky stuff  up my ultra-sensitive nose and I started hallucinating. But you would be wrong about that!

No, the headline refers to our first real road trip since we returned from Syracuse in September 2019. This was only three days, but when Heather was driving she kept telling me this trip was practice for another possible trip to Syracuse, that wonderful place where there’s air conditioning throughout the house and nice people dote on me 24/7. Well, we’re not there yet, and Heather’s message to me was clear: Keep up that whining from the back seat and you won’t be coming with us. She sounded like she meant business, too. I whined nonetheless.

We stayed on Birch Bay, northwest of Bellingham and within sight of the Canadian border, which we are still not allowed to cross. This bay of Puget Sound is at sea level, more or less, lapping up on its pebbly beach just enough to scare me away (I don’t like waves). So it was not my ideal location.  But after breakfast, we got back into Heather’s car and started to climb, from farmland through the foothills and eventually to the Mount Baker Highway and the North Cascades. Because of road conditions, we couldn’t drive all the way to end, but we all got pretty high, all the way to the appropriately named Heather Meadows Visitor Center at 4400 feet. There was even snow on the ground in a lot of places! 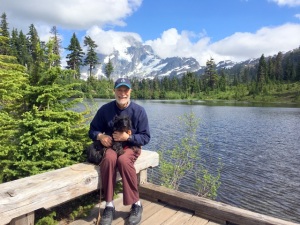 We ate lunch and wandered the trails around the Visitor Center, then backtracked to Picture Lake to  take some pictures (what a concept!). I pursued a dragonfly for a while, waded in the lake for a few seconds (no waves here!), and  I even let Mike sit down and take a photo with me. After being so nice to him, I was expecting a reward, such as my own ice cream cup or riding in the front seat with him. But did he let me lie in his lap on the way down the mountain? NO! Did they stop for ice cream? NO! They only stopped for beer, and I had to stay in the car while they went inside. Not fair.

The whining will continue.

2 responses to “Chloë Gets High”