Chloë Renews Her War on Cats

It’s well-known that I don’t like cats. They are mean. They are vicious. They make awful noises. I will chase one any chance I get. Lately,  however, I am under tighter watch. My opportunities have been few. Not surprisingly, during this period of decreased diligence, the cat population on our block has soared.  There are so many that I don’t even know their names, except for that damn Fred (short for Frederika) the Bartons’ cat. I don’t know whether it’s because Fred misses her brother Ted, who arrived with her but was shipped out for bad behavior a couple of years ago, or whether she’s trying to exert her resident dominance over the newcomers, who usually hide on their porches and under cars whenever Fred is around or I come prancing down the street. 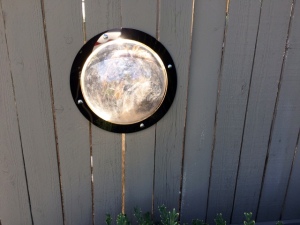 Lulu’s window on the world.

I was hoping to gain support for my war against cats from the pack of new canines that have moved onto our block. New families means more kids, more names to remember and more dogs. Within the past few months, my pals April (border collie), Merrie (Basset hound) and Ranger (Bernadoodle) and I welcomed two younger Bernadoodles (Walter and Magnus) and two more doodle puppies. Now we have the Aussiedoodle pup Tucker on one side of the house and the sheepdoodle Lulu on the other. Tucker is still too little to come out and play, but Lulu let Mike rub her ears one day, and she is always looking at him through her fence portal. I think she likes him.

All these new dogs have been nice enough to me, but I don’t see me being able to form them into anything close to a comic. cunning, marauding pack like you see in movies. These designer breeds can shake their wang dang doodles all night long, but none has demonstrated any proclivity toward joining my quest for neighborhood dominance of the cats. I’m looking for toughness, resourcefulness and a killer instinct. I don’t see it in this bunch.

Frequent sightings all over the neighborhood.

Lo and behold, help arrived from an unlikely source. Coyotes, long a staple in Magnolia, seem to have proliferated during the pandemic, scooting onto our peninsula on the rail lines and finding plenty of inviting habitat and food sources when they got here. Once a rarity, coyote sightings at all hours of the day and night are now frequent. In fact, Heather has spied one several times on our daily walks and sternly kept me on a tight leash as we fled in the opposite direction every time.

She needn’t have been concerned that I might try to chase it like a squirrel, however.  I’m not that dumb! And remember, I’m a dog who turns her head away and pretends to be interested in trailside foliage rather than look a passing Chihuahua in the eye. I’m not running after any coyote, I’m all for them, especially after I found out they can be an ally in my feline war.

On Magnolia Nextdoor, a neighborhood blog, a women recently wrote, “At 4:40 this morning I was woken up by what sounded like a coyote killing a cat. I’m posting this in hopes that people will keep their cats indoors, especially at night, as this will be the third cat killed in a week in Magnolia by coyotes.” Aha, I thought; maybe the threat of a passing coyote could be a reason to get Fred to stop howling outside my window at night.

Unfortunately, before I ever had the chance to pen a love letter to the Wile E. Coyote we’ve seen in our personal Discovery Park habitat, Mike came upon this cautionary tale via Wikipedia: Coyotes occasionally hunt together with badgers, digging up rodents side by side and then lying together, licking each other’s faces. 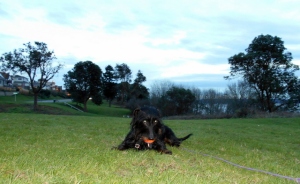 Gross! As a proud badger hound of the first degree, I can’t go there. Yet.

One response to “Chloë Renews Her War on Cats”