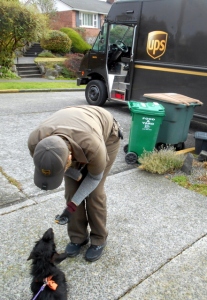 Maybe things are finally loosening up. For months, the only people I saw were Mike and Heather. Caroline, David and Schatzi stopped by once. That’s about it.

Then, lo and behold, things begin to awake. Heather and I encountered my favorite UPS driver on the street one day. Donna had been away several months with an injury, but she’s finally back on our route and still carrying bickies.  I am hoping Mike and Heather keep ordering a lot of stuff online.

Then my favorite house cleaners, Jeré and Channon, made their return, and believe me, as someone who’s down on the floor of this house a lot, their return came not a moment too soon. Heather is a meticulous cleaner, I  have observed over the past several weeks, but she’s not a professional like Jeré and Channon are. They know all the secrets. And beyond that, not only did I get my usual quota of treats from them while they were here, but they also left a few extra ones to make up for the times they couldn’t come since February. 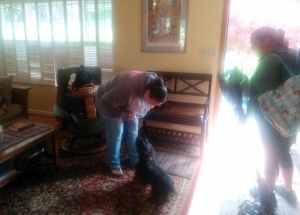 There were a couple of other returns of note.  I finally got to see my old pal Penny, who has been quarantined at her house since returning from Florida in March. Now she has a little dog named Phoebe living with her until she goes to New York in another week or so. All that flying! I’ll miss seeing all my Syracuse friends this summer, but you’re not getting me on an airplane any time soon. 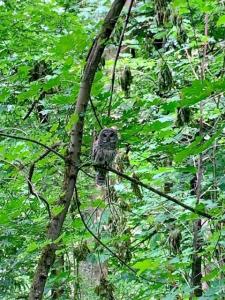 Another return was the threatening barred owl to her favorite local haunts among the tall trees of Discovery Park.  She has stalked us for several years, and this time she swooped down on Heather and me when we got a little too close to her youngster, perched on an overhanging branch nearby. There have been many other owl sightings in the area, but we’ve seen her just one other time, and Junior wasn’t visible. We’ll keep looking, though.