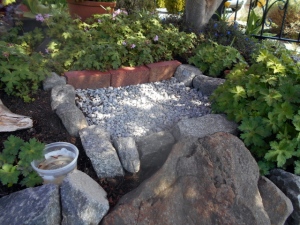 Sheltering in place provides ample time for do-it-yourself home improvement projects. That’s why Mike volunteered to create a perch for me in the front yard.  Until then, when Heather wanted to tie me up ioutside, she would put the bed on the sidewalk, where I could be a nuisance when anyone came by, or in the garden, where plants got ruined, which made Mike unhappy. We don’t want to make Mike unhappy. 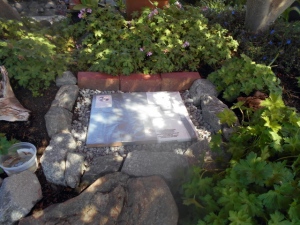 My perfect site would give me a good view of the street, ample shade and enough distance from the sidewalk that I couldn’t physically threaten innocent passersby, man nor beast. So Mike selected a site above the rockery next to the driveway, a bit above sidewalk level. The maple tree above supplies a thick canopy from April through October and doubles as the anchor for a rope attached to my harness to refrain me from taking off after the Bartons’ cats. I guess I could still try to lunge at a toddler on the sidewalk, but I wouldn’t get very far, and there’s a wrought iron fence in between. And no, I’m not dumb enough to try to jump off the rockery into the driveway, which would no doubt leave me dangling amid the crocosmia. 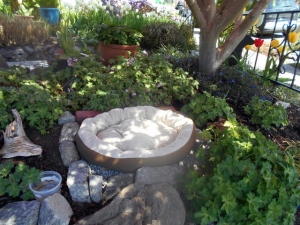 Mike prepared the site by transplanting a couple of perennial geraniums, digging out roots and dirt in the vacated area and ringing the circumference with rocks and bricks. He then filled the center with gravel for drainage and to level it off.

A thick plywood board became the removable floor. Mike lined one side with the shiny plastic packaging that protected the new TV, and then he wrapped it tightly with heavy-duty plastic that originally came around an area rug. After centering the weatherproofed board within the ring of rock and brick, Mike deftly placed my long-treasured Peanut bed over the board, and Heather led me through the garden to my new throne, where I immediately turned around  in a circle twice, made myself comfortable and began my reign.

First impression: positive!  I’ve got my own water bowl and a great view of the street down as far as the Bartons’ house, so I know whenever a UPS truck, a mailman, dogs or cats are coming my way. I’ve been an effective sentinel, too. Not one cat has tried to pass while I’ve been sitting there. Unless the geraniums encroach my bed completely, I should be good here at least until the heat of summer. If the southern exposure makes this spot too hot for me, I’m sure Mike can attach some kind of pull-up screen to the maple tree. It’s the least he could do.

Chloë on Her Throne

This entry was posted in A Dog's Life, Chloë's Excellent Adventures and tagged dachshund, wirehair dachshund. Bookmark the permalink.

3 responses to “Chloë Ascends Her Throne”