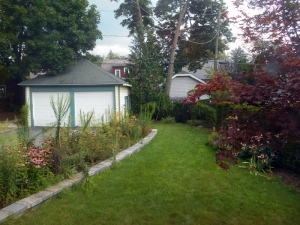 In our summer neighborhood, cats were everywhere. I was forced to remain on constant vigil lest they overrun us. Two lived in the house right next door, an orange one and a gray one. They taunted me by sunbathing in their driveway. Sometimes they hid inside the flower beds in MY back yard, right in there among the purple coneflower, loosestrife, yarrow and dill. I know, because I could smell them, long after they had retreated to other lairs. There’s nothing worse than the smell of rotting cat hurl. Yuck. 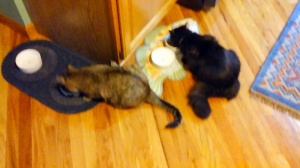 Cleo and Bear get their last meal before their nemesis arrives.

Cleo and Bear, the cats who belong to my aunts Susie and Debby, lived on the other side of Meadowbrook, but I was constantly scheming to get a walk over there. Those cats were afraid of me. And well they should be, especially since I loudly chased after them on my most recent visit. One went upstairs and the other ran downstairs, into the basement. My outburst got them quarantined to the second floor for the rest of our visit, while I was similarly confined to my bed at the base of the stairs, from which I cast a menacing gaze upward whenever I felt their eyes upon me. The cats stayed put. In fact, I saw so little of them on this trip that I can barely recall what they look like. No matter, I still know they’re there, and I will corner them one day.

Thankfully, I found one cat in the Salt City that knew its place. I just had to look this guy firmly in the eye one time and he immediately turned to stone. 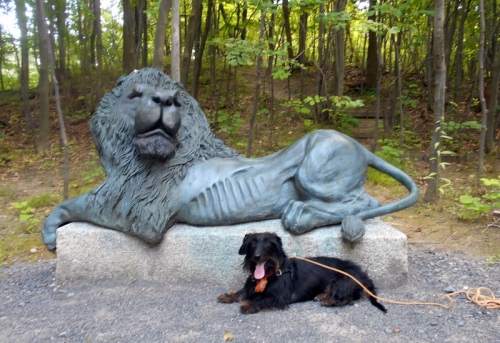 This entry was posted in A Dog's Life, Cats and Dogs, National Tour and tagged cats and dogs, wirehair dachshund. Bookmark the permalink.