Chloë Turns Nine in a Snowstorm

My ninth birthday mostly came and went without fanfare. My brothers are in Arizona, so there was no big get-together. Heather forgot about it until just before I went to bed.  Mike gave me no special dinner or extra treats. I got no gifts and just one card, an e-greeting from Yankee, a puppy in Juneau who I haven’t even met. And then it started snowing, and I promptly forgot all about feeling low.

I love the snow. And this time, there was lots of it.

Hurrying up after second snowstorm.

By the fourth time it snowed in about a week, it was getting tough for someone of my stature to get around, but I was still digging it. People out walking with their much larger dogs would marvel at my speed and agility when bounding through the snow. Not bad for a 9-year-old wiener dog, eh? Anytime snow covers the ground, I can match the Westminister Hound champ Burns for moxie. 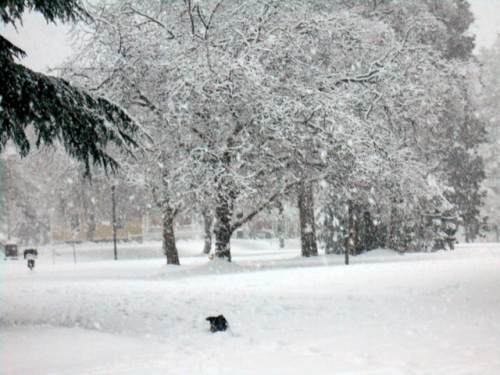 Chloë at the height of the fourth snowfall

So how much snow did we get? It must have been a lot, because Mike said that for one day Seattle looked a lot like Syracuse. 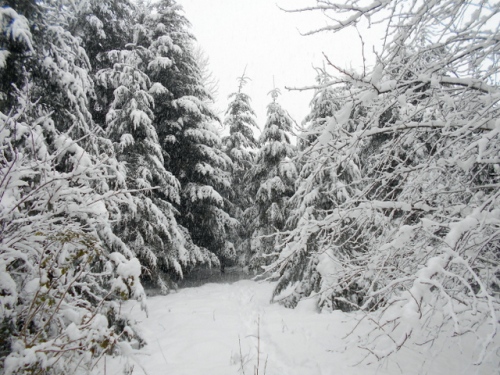 On our block, neither mail nor newspapers nor even UPS packages were delivered for several days, although I made up for my UPS fix on Valentine’s Day when I saw Donna three times in one day and got heart treats every time. Can you believe that some people in Seattle don’t have a snow shovel? 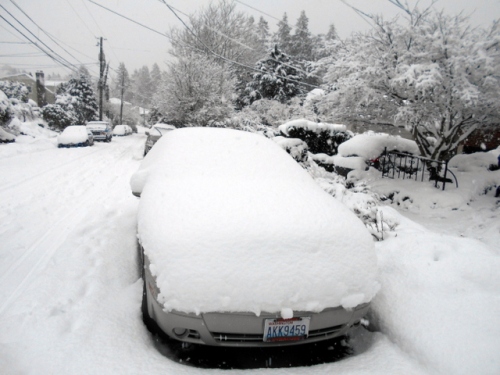 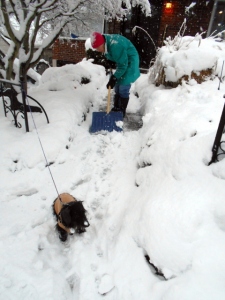 All the snow was pretty, but the forecast was for additional snow to turn to rain before dark, and Heather knew this beautiful snowy blanket would turn to ugly slush and ice soon enough. Since she has three snow shovels (each for a different shoveling task), she was able to clear most of the sidewalks on our block and several storm drains,but even she couldn’t do the whole city. So the day we walked to over to the Magnolia library on partially shoveled sidewalks, she told me it was OK for me and poop on the property of the people who didn’t shovel, and she wouldn’t pick it up. But we all knew that was a lie. She’s way too Canadian to let that happen.

This entry was posted in A Dog's Life, Chloë's Excellent Adventures and tagged Burns, snow. Bookmark the permalink.