I hadn’t even caught up on recounting my adventures on the trip east when we started our way back. There’s just so much ground to cover! So for now I’ll move on to detailing what a fun time I had in Syracuse while we were there.

We stayed in a different house than we did last year, and I liked this one much better, even though it wasn’t across the street from my aunts Susie and Debby. This house had more rugs for lounging and rubbing my back, and four floors for roaming, including a basement and an attic. I wasn’t supposed to go into the basement, but nobody said anything about the attic, so I snooped around up there a lot, even though it was really, really hot. In fact, it was hot everywhere in this house except in the room we all slept in, where it was always a perfect 68 un-humid degrees. We spent a lot of time in that room. Everywhere else in the house was hot and sticky, and Mike and Heather complained about it a lot more than I did.

Even though it was hot and humid, we took many walks in some neat places, although we often went in the morning, when it was a bit cooler. Meadowbrook Basin and Oakwood Cemetery, with their shady trails and steadily increasing squirrel and deer populations, were still my favorites. We only went to the quarry up at Skytop once this year, but we did get to Clark Reservation, where the cliffs are even taller. I climbed all the way to the top of Pulpit Rock that day, and on another day we hiked up to the water towers above Manley Field House, which are now brightly decorated with spray-paint graffiti.

We also hiked along canals, on former rail beds and around lakes, and threw the ball in the fields behind the high school that was a few blocks away from where we were staying. I got to know the neighborhood well, both from observation and from Mike and Heather recalling instances from when they lived there 20 years ago, long before my time.

More importantly, I finally took part in some water activities besides taking a bath (ugh) and diverting rivers by digging their banks (great fun!). Normally, any slight movement in a body of water, such as a lake lapping gently on its shoreline, sends me into a tizzy. But no one had ever taken me on a boat before, and once I got on top of the water instead of next to it, I had a great time.

All paws on deck

First I rode on my buddy David’s power boat on Tuscarora Lake when he took people water skiing. I just walked around on the deck of the boat, watching, and nobody suggested I try anything fancy, like dropping a ski or doing flips. I was good with that. And the following weekend I got a ride around the perimeter of Brantingham Lake in the Adirondacks with my pal Juneau George on a party barge. I didn’t see a lot of partying happening on the boat, but it moved so slowly that I was able to put “all paws on deck” and peer over the railing to spy on the partying on shore.

We also visited the Hansens, whose house we stayed in, while they were living in their farmhouse in Madison County. That was definitely the best spot for me. Not only did it have great scents to track and a giant lawn for fetching my ball, but it had a large pond where I could step right in from shore with no waves in sight. This is exactly the kind of water feature we need in our back yard in Seattle. I’m going to start lobbying for that as soon as I get home. 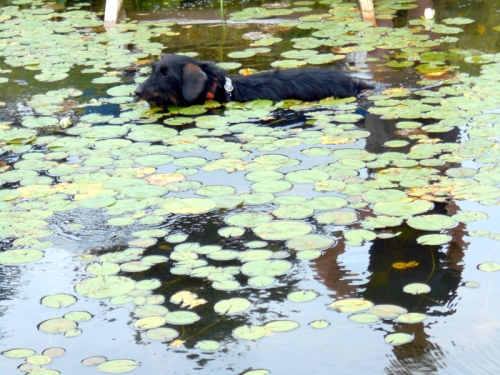 Diving for treats in pond

3 responses to “Chloë Hits the Water”