Chloë Has a Ball 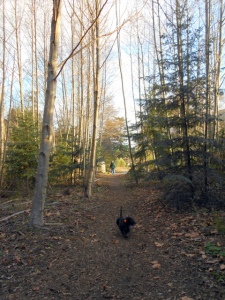 Why, I ask, is every lost ball my fault? Not once have I tossed a ball that went missing. OK, I admit I’ve dropped a few in the woods when something better came along, but other than that, in my view, Mike and Heather deserve the blame. They threw it, so they are responsible for losing it. End of story.

No longer as frequent a story as it once was, however.  The purple-and-white Visi-Balls I learned on are hard and yet springy, and they take crazy bounces. I’ve lost count of how many we lost in my younger days. When Mike plotted them on a map of Discovery Park, there were a lot of Xs on that paper, and that doesn’t count the ones lost in the creek at Carkeek Park, the blackberry thickets along Magnolia Boulevard and many other far-flung locations. Those balls are not coming back. But since we switched to the Chuckit Whistler balls, we hardly ever lose them. Either my senses have vastly improved with age, or these newer balls, with their softer texture and deep indentations, hold a scent better, making them easier to find. Guess that Ahimsa scent-training class paid off after all!

I hadn’t used one of the purple-and-white balls in quite a while when I stumbled upon one in the woods along Chloë’s Lane while I was fetching another ball to bring back to Heather. I’ve gotten pretty good at finding stuff that lies on the ground, especially if it reeks of questionable digestibility,  but finding this particular ball made me especially proud, even though it wasn’t anything I could eat. I was so happy with my discovery that I carried triumphantly it all the way home and proudly presented it to Mike as soon as  I got through the door. Then I took it onto the living room rug and rubbed myself on it for about 10 minutes, getting its scent all over me, just in case Heather decided to break out the OxiClean to buff it up. Since we haven’t been throwing with this kind of ball for some time, Mike estimated it might have been there for a couple of years. What a find this was! For a few days, I couldn’t let it out of my sight.

Heather hasn’t cleaned my new-old ball yet, but it seemed a little shinier after I strutted  around the house with it in my mouth for a few days. So far, Mike let me keep it, and he even rolled it along the floor of the living room and kitchen, like he does with Wiffie, but I have a feeling this game will end as soon as we break something, most likely the glass doors on the dining room cabinets. Which could be any day now, come to think of it. Better enjoy this while it lasts.

One response to “Chloë Has a Ball”