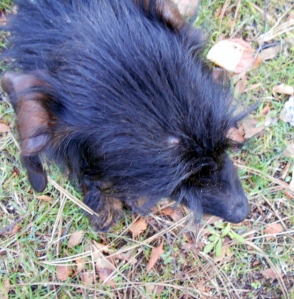 It was about time to address the elephant in the room. Mike first noticed the tiny bump on my head way back in the spring, shortly after my annual physical exam. Since my personal physician (Dr. Aimee Kimmel) has just examined and drained two less visible lumps on my side, Mike decided to just keep an eye on this new one, about the size of a pimple. I Mike didn’t feel around for it, he wouldn’t even have known it was there.

Months passed. The tiny lump on my head got bigger, but not much. Then Mike read a book (try not to laugh) called Lily and the Octopus by Steven Rowley. It’s a novel about a dachshund named Lily. The “octopus” is a tumor that grows on her head. It’s a metaphor, but  Mike took it literally. He checked my lump every day. When he got back from his trip to see his mom, he decided it was big enough to take me to the vet, especially after the lump broke one day during grooming and some gook came out. Nurse Heather made it stop, but off to the vet I went. 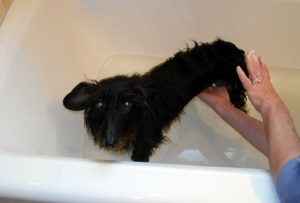 Mike looked nervous, so I had to sit on his lap in the waiting room to calm him down. Dr. Kimmel was on maternity leave (what nerve!), so Dr. Crow examined me and set Mike’s mind at rest. It was only another  subcutaneous cyst, like the other ones. The doctor drained it, but warned that it might come back. That means, of course, that my otherwise perfect countenance may forever be marred by a small bald spot on my head. My choices appear to be either a comb-over (too vain) or to just tell anyone who asks (and few would be so forward as to bring it up) that it’s just a visual balance to my naturally bald ears. Perhaps the hair will grow back and cover the spot, but that will probably  be too much to ask for. As long as the lump doesn’t devour me or the spot get much bigger, I can live with it. I’m still cute enough, believe me. I’ve been practicing, just in case.

Unfortunately, Dr. Crow didn’t stop her examination at my head. By the time I got out of there, I got some gook pressed into my ear to stop a yeast infection and a shampoo for my belly to get rid of a rash and dry, flaky skin. Who knew I was such a physical wreck when I went in there? On the other hand, it’s always good to know you don’t have brain cancer. And my weight at 18.6 pounds is still within my normal range, so I won’t have to suffer through another diet. I hate those.

All the consternation was worth it, however, since I got extra treats from Mike for being good at the vet and lots of cheese from Heather for being a good girl at home in the bathtub to get shampooed. She also laundered all of the sheets and blankets in my crate to remove any pesky germs or foreign bodies that might remain and bring back the rash, which Dr. Crow thought might be related to the yeast infection. Mr. Monkey was happy to have his living space renovated at no cost, and Mike was so happy to have one less thing to worry about. A win-win for all, even if I did have to endure a visit with a new vet. With any luck, Dr. Aimee will return to her post before I do.

4 responses to “Chloë Marks Her Spot”