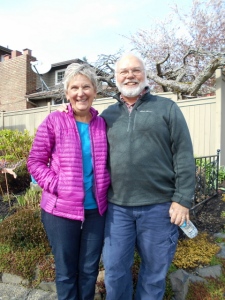 Among my many pals from Alaska, I see Cathy and Ron the most. They have pretty much become part of my pack, like Lynn and Charlie.

In fact, they had visited us just a few weeks ago, so when they showed up again I figured they missed me so much that they decided to come back quickly. But the morning after they got here, Cathy left for a few nights, and every night Ron came back to the house late, looking very tired.  Then Cathy returned, but I could see right away that she was hurting and probably needed to stay in bed for a while. That’s when I realized I could really help her out by snuggling close to her in her bed and in front of the fireplace, which was turned on a lot, just the way I like it. And  it didn’t take me long to train Ron about the treat container by the TV set. Whenever I stared at it, he got the message.

Ron walked in the park with Mike and I a few times. One day in the pouring rain, he recaptured me when I sprinted off from the parade ground to chase a fat gray rabbit behind the housing-renovation area. Ron cornered me in about two minutes; it would have taken Mike a half hour at least, maybe more because it was raining so hard. I was good after that. 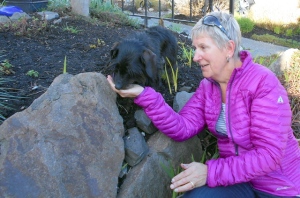 Cathy has Chloë eating out of her hand.

A few days later, Mike tried  to get me to pose with Ron and Cathy for one of my patented Visitor Portraits,  but I was far more interested in chomping down the black  compost that’s been covering the front yard for about a week. Yum and um! Heather had been wondering why my poop was black, and now it’s apparent. No big deal. Mike can feed me something in tan to even things up before St. Patrick’s Day.

I  obviously did a good job nursing Cathy back to good health, because by the time she and Ron left a few days later, she was already able to walk in the park with us for more than an hour. I had a great time while they were here; something good was always happening, and even when I was left home for a while, I got another Wobbler to knock around. In fact, for a couple of days after Ron and Cathy left I kept looking for them in the downstairs bedroom, all for naught. Now it’s back to boring Mike and his NCAA Tournament bracket.

This entry was posted in A Dog's Life, Chloë's Visitor Portraits, Friends of Chloë and tagged wirehair dachshund. Bookmark the permalink.