Merrie: Another fan of UPS.

I had already heard the rumor from Merrie down the street, so the it didn’t shock me when Heather read me the news from  the Magnolia Voice blog the week that Mike was visiting Syracuse: 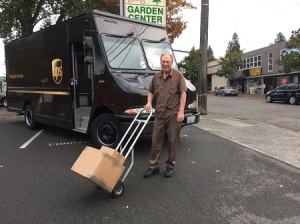 “After 35 years of delivering for UPS in our neighborhood, Kevin is retiring.  Kevin’s official last day is Oct. 30.”

Apparently Merrie and I were not the only Magnolia dogs to perk up their ears at the sound of his truck. Just  check out some of the comments to the blog post. Personally, I went absolutely nuts with barking, squealing and running around in circles every time I head that mighty truck engine roar down our block. And my two-biscuit gravy train was about to end? Say it isn’t so!

Luckily, Heather had ordered something on Amazon.com (Countertop Magic, I think it was), and we had a delivery that week while Heather was home working during the day. As usual, I started yelping and ran to the front door as soon as I heard the brown truck downshifting on Magnolia Boulevard. Heather leashed me up, holding on firmly, and we greeted him at the door. Heather gave him an envelope containing one of my special thank-you cards, my business card and a gift in return, a small token of my esteem for all the great service and Milk Bones he has delivered to us all these years. I scarfed up my last two Kevin biscuits with relish, since Mike wasn’t around to beat me to it and save it for later. No saving them on this special day!

When Mike got back, Merrie’s owner Jane told us that Kevin had already introduced them to his replacement driver, and that the guy gave Merrie five biscuits. Five! she said. Mike blanched when he heard that. We have had no corroboration yet, but clearly, educating all new UPS drivers on biscuit etiquette will be top priority.

For the time being, Mike is keeping me inside whenever I hear a brown truck roaring by. If our house gets a delivery, that’s one thing, but he doesn’t want me to be looking expectantly at every person in a brown uniform that I see, or to beg from drivers delivering to our neighbors. Mike and I have already seen a couple of drivers pass by us without slowing down and tossing two biscuits out the truck’s doorway as I stare at them forlornly. With the busy delivery season starting, I don’t know if I will be able to handle serial disappointment like that on a daily basis. It’s going to be hard on both of us.

Still, one day this week I led Mike on a scouting trip around the neighborhood. Although we did not spy a single UPS truck, it happened to be garbage pickup day, and I was lucky enough to snag a loaded pizza crust off the ground just the other side of the boulevard. Mmmmmm…it was the chewy kind, with some sauce and cheese still on top. No way Mike was getting that prize out of my mouth!  Anybody who says that I can’t walk and chew at the same time hasn’t seen me strut down the sidewalk chomping on a slice of pizza. When there are no bickies (dog biscuits) coming your way, you just gotta improvise.

This entry was posted in A Dog's Life, Friends of Chloë and tagged UPS, ups driver. Bookmark the permalink.