Chloë Lives with a Cat 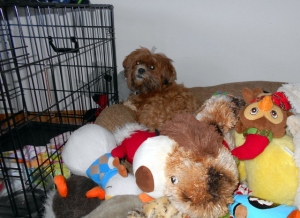 Pumpkin perched atop her toys.

Heather, Mike and I headed out to my “getaway” in the Cascade foothills for the first time in a long while. Maybe we all needed some separation after my dog mentor Tara died, or maybe it’s just coincidence and Tara’s owners haven’t needed us for house- and horse-sitting. I do miss Tara, but so far this time in her house has been a lot less stressful for me: No growling every time I drag something out of the toy pile, and no pilfering of Heather’s attention and sometimes even my treats. So now there is no hindrance to making Mike throw stuffed toys around the living room for me to chase, catch and throttle until their stuffing spews forth. That’s when Heather jumps in for damage control.

That little mop Pumpkin is still around, but she’s so docile that I feel and sometimes act like the big, badass alpha dog of the house. Pumpkin does cute really well, but she is pretty much clueless about anything else. Any dog that has no interest in treats is clueless in my book. On the other hand, more for me. 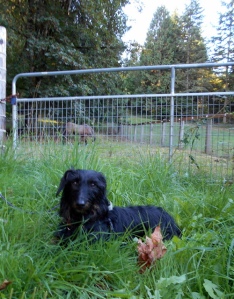 We’re out here for almost two weeks, and I had a great time when we first arrived. We had great weather, and we went on several long hikes in places with lots of wildlife to sniff after.  I  also played fetch with Heather something like 75 times in a row on the huge lawn, and did a lot of munching of grass, or as Mike refers to it, my salad bar. I particularly enjoy the long blades in the fenced-in pasture, even more so because Mike hates to chase after me when I go in there, so I do it every chance I get. At the end of one walk I thought about checking out a pony in a field, but when we went across the road to visit we realized the pony was behind an electric fence, and I wanted no part of that. Besides, I can get as close as I want to real horses back at my getaway any old time I want to. It’s just that I don’t want to, ever. That barn is still a place I prefer to avoid. It’s loud, dark and scary in there. 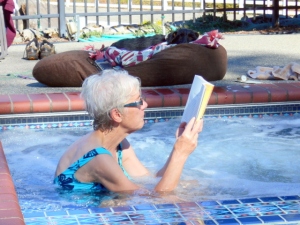 Lounging by the pool

In fact, apparently one of the barn cats hated living there so much that he wormed his way into becoming a house cat. I kind of sensed that he was around, but in my first week here I’ve only had one brief encounter with Mister Fuzz. Heather quickly got between us before I could do any damage. Even so, the incident allowed me to certify the existence of Mister Fuzz, who until then had been only a faint scent and a big rumor to me. Now I knew for sure that he was upstairs, and even in what rooms he liked to hang in. 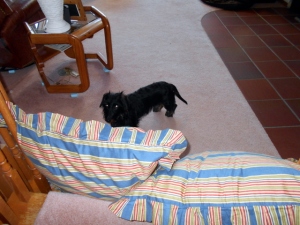 All of a sudden, going upstairs to flush him out became a much higher priority for me. Heather was forced to erect a barricade of throw pillows at the base of the stairs to keep me on the first floor, but I’ve already breached it once, so it’s hardly insurmountable. For our remaining time here on this trip, it will be my job to get around it and stalk Mister Fuzz. In our tete-a-tete, he looked huge, and as a barn cat he must be tough enough, even if he does seem to be hiding out silently most of the time.

Well, if Mister Fuzz is as smart as I think he is, he’ll just stay under a bed and out of my way. Otherwise, fur will fly. I guarantee it.

2 responses to “Chloë Lives with a Cat”