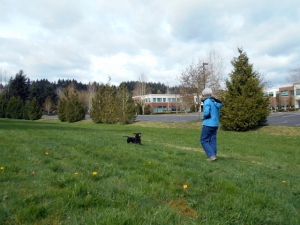 Heather and I had a pretty good time while Mike was away visiting his mom and friends in Syracuse. I finally got to go to work at Heather’s new office, which was relatively dull. Everyone there was so busy there that they barely noticed I was around. The days I stayed home were more exciting. One day my best friend Lynn came over in the afternoon to hang out. We went for walks, had treats and went crazy, strewing toys all over the house. It’s always fun when Lynn comes by.

More excitement came on the weekend, when I stared down a raccoon in our neighbor Claire’s backyard. Claire finds great joy in feeding and observing the coons, and one showed up in the middle of the afternoon while I was waiting for Heather on Claire’s patio. When it saw me, it hopped to the top of the fence and stared at me before leaping into the yard next door. It knew better than to mess with this hound.

Later the same afternoon I pulled a muscle, or maybe threw out a joint, or something. Whatever happened, I limped through the latter part of my walk with Heather. My front right leg didn’t hurt exactly, but it was weak and I couldn’t put my weight on it. Then, as suddenly as it started, I was cured. I immediately wanted to chase rabbits and cats, or at least my purple-and-white ball. Heather wouldn’t let me.

Heather was worried about me until the next day, which worked to my advantage. She let me sleep with her in her bed all night, and on Monday she decided to work at home so she could take me to the vet if necessary. I was fine, however, at least from a health perspective.

In other ways, however, Mike’s absence meant sacrifices for Heather and me. I got no treats for waiting inside the front door to have my harness removed, for example, and no treat each morning for going downstairs to watch Mike exercise. Heather didn’t do much better with Mike gone. Although Mike left plenty of salads and casseroles for her to eat, she had nobody home to put her beer in the freezer so it would be ice-cold but not frozen when she got home from work, which is one of Mike’s more important jobs.  Too bad she doesn’t have an app for that.

Yes, I had fun while Mike was gone, but I also missed Mike badly. So when he walked into the house after coming from the airport,  I jumped him and bit his nose until he finally had to push me off his head, and as soon as he relaxed, I did it again. I think I got my point across,  too, and he’ll think twice before leaving me again. He even brought me souvenirs from his trip, gifts from my aunts Susie and Debby in Syracuse: several Milk Bone Brushing Chews  (“Tastes Like a Treat, Cleans Like a Toothbrush” —free samples from BJ’s Club in East Syracuse) and a dog-friendly cookie, shaped like a baseball, that the aunts got on a  trip to Cooperstown, N.Y.

But what’s going on? Several days have passed, and I’m still waiting for Mike to unwrap the cellophane off that cookie.