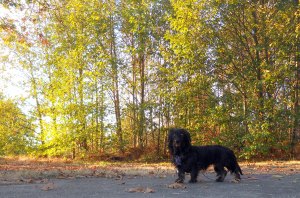 My favorite spot in the park  lies along a lightly used trail behind what’s known as the Headquarters Building. I call it Chloë’s Lane. It has the best spring greens and the best course for playing fetch and  “find it” (when the ball gets buried in the underbrush and I have to sniff it out). It’s also the gateway to the small hill where Mike and I play my other game, catch, with him throwing the ball uphill and over my head, so I have to sprint into the woods to retrieve it and then “throw it back” by dropping it and nosing it down the hill until it gains momentum and rolls all the way to back to Mike at the bottom. I refer to this as my “stupid pet trick,”  giving a huge shout-out to David Letterman on his impending retirement. Maybe Dave’s dog will be blogging soon.

Anyway, one day recently we returned to Chloë’s Lane and found something new at the head of the trail. Atop the mound of grass, weeds and twigs that had been accumulating there for a year or more was a round plastic reservoir, with the pile fortified with logs. Further investigation revealed that it was the same unit previously deployed at the top of the South Meadow, complete with its graffiti. Within days, hoses appeared in the asphalt parking lot between the Headquarters Building and Chloë’s Lane.

Ears back, waiting to play catch

I’m  not exactly sure why the tank and hoses are there or how long they will stay. Clearly, the reservoir deploys around the park as needed, so it won’t be there forever. But as for why it showed up, I’ve yet to see any of the hoses hooked up to the spigot.  The tank might be empty, for all I know, and there are no recent plantings in areas close by that are crying out for water.  I can only hope that this equipment does not a signal that further improvements are planned for this lightly traveled corridor, which is not far from where private developers have taken over the former naval residences along Officer’s Row and plan to renovate them for resale this summer. As you might imagine, I prefer that Chloë’s Lane stay just the way it is.