Chloë Turns Five with Her Bros

Frank, Stanley and I quietly passed our fifth birthday in February. Sometimes when my brothers and I get together, we wonder what happened to the other two boys and three girls in our litter. Not for long, though.

We met the guys as usual near the park’s south parking lot, and the three of us sniffed butts and rubbed noses for about 15 seconds to renew acquaintances before I got a strong scent of rabbit and took off into the underbrush. 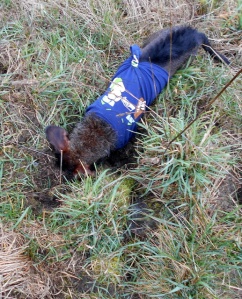 Frank and Stan were more interested in chasing their ball, anyway. Stan was still into harassing me whenever he got the chance, while Frank was his usual aloof self, considering pouncing after rodents much more fun than paying attention to his sister.

We had not seen the boys in quite a while, and I was happy to see they have slimmed down a lot. Eating a different kind of food, we heard. More exercise, too, from the look of them. They’re looking more like linebackers than offensive linemen these days. Both were decked out for the Super Bowl in Seahawks gear. Their owner-mom told Heather I would be a 2T (toddler) if they wanted to get a onesee for me. Thank goodness I didn’t see Heather running out to Fred Meyer before the game. To me, Super Sunday just means more crumbs on the floor than on a normal weekend. Crackers, cheese, that kind of stuff. Sounds super to me! My day turned out better than the game did, too. 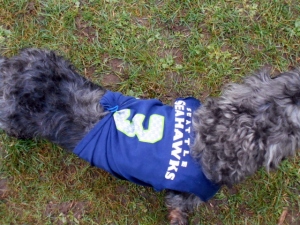 After we took  a short walk through the meadow with the boys, they had to run off to another activity, but before they left they kinda posed for pictures. Mike tried to get the three of us together for an official fifth birthday photo, but from these shots, everyone will be able to see who pays attention to instructions and who does not. What goes on in those large heads of theirs, anyway?

8 responses to “Chloë Turns Five with Her Bros”