Chloë Returns to the Beach

I like wading into water, as long as I can touch the bottom. I can swim, but I’m not big on it as an aerobic activity. With my short legs, I figure wading is the way to go. Slow-moving streams are nice, and rivers, too, as long as the current’s not too swift. But waves, no thank you. Not even teenie-weenie Puget Sound waves. Sorry, they just make me nervous. I want to get away from them, fast. Forget chasing a ball or a stick into the surf, either. In fact, I wouldn’t even chase a hamburger into water that’s moving like that. I could get swallowed up, easy. Or worse.

It hasn’t always been this way, however. Mike unearthed secret photos apparently taken with a hidden telephoto lens at Meadowdale Beach in Snohomish County when I was but a young pup, about four years ago. They show me standing tall, looking into the water, challenging the waves. I feared nothing.

But when we hiked to that same beach again with my new pal Charlie last week, I refused to consider getting too close to the gently lapping waves, no matter how many times Heather, Mike and Charlie tried to coax me with treats or yanked on my leash in frustration.

This way, Chloë! No way, Heather!

After I ran back upstream a little, Heather decided to give it one more try. She was determined. I reluctantly trudged along…until I could smell the fresh water turn to salty. That was as far as I’d go. 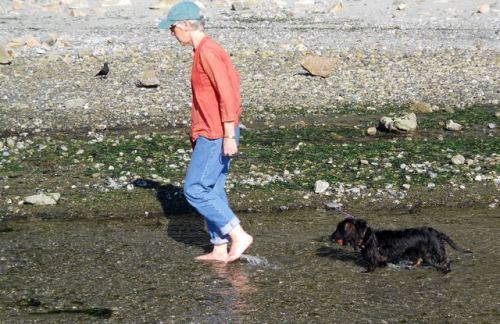 You’d think Heather would know me better by now.

This entry was posted in A Dog's Life, Chloë's Excellent Adventures, Hiking. Bookmark the permalink.