Chloë Gets Involved with Her Community

Mike and Heather went on vacation for a long time, and they were lucky to have me here protecting the house. The neighborhood endured three robberies and a stolen car while they were away, all coming on the same evening, and while it was still light outside. None occurred at our house, however, and after those incidents I threw my internal security system into  high alert. With my nose and ears working overtime for the duration of their trip, I successfully defended the house, both cars and my friend Lynn until Mike and Heather returned.

A bag of bags

And did they bring me anything to say thanks? Some snacks from the plane, perhaps? (Hardly; I heard Mike complain that he didn’t get one damn pretzel on four flights.) Maybe some new, orange-colored dog clothing? (Something is allegedly on its way via UPS, my waiting assuaged to a degree by the anticipation of the Brown Man’s biscuits that will accompany the package when it finally arrives.) No, all Mike and Heather brought me was a couple of year’s supply of poop bags. Like I’m supposed to care. (Note to fans: I think you can stop hoarding them for a while.)

As usual, hanging with Lynn was cool, especially at dinner time and during our trips downstairs to escape the summer heat. Beyond the robberies, the highlight of my “staycation” with Lynn came when we were coming back from a visit to her house to pick up mail.  As we drove in her car through downtown to Magnolia, the sidewalks along Fourth Avenue were lined with people of all ages, some in lawn chairs, some on blankets and even some on small sofas.  Soon this would become the route of the Seafair Torchlight Parade, but for now, in the slow-moving traffic Lynn’s car became the parade, and I was the main attraction, like a Macy’s Parade balloon. 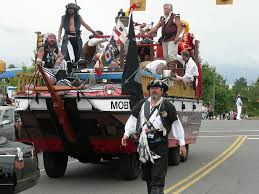 Lynn always lets me sit in the front seat, so I was able to get up on my haunches and look out the open side window to watch the crowd. Soon enough, people started waving, pointing and shouting at me,  like they were my adoring fans.  And why not? With my front paws perched over the open window, tail wagging and tongue hanging out,  I did my best to look cute. It wasn’t hard.

Traffic crawled northward, but it was a good pace for me to interact with the crowd. At red lights, Lynn supplied a few laps of cool water and an occasional cheese heart. When we reached Seattle Center and the crowds disappeared, I felt a letdown. I had enjoyed my moments in the spotlight, but I was also tuckered out from being the center of attention for so long. When we got home, I had my dinner, and then Lynn and I went downstairs for popcorn and a DVD.  I soon fell asleep, dreaming again of my Torchlight Parade debut.

At the block party

A couple of days after Mike and Heather got back, all three of us went to our annual block party, held in the street at the corner near the park. This time my friend Einstein’s owner, Carol, took charge of the meeting, and she had plenty to say, mostly about security. Mike managed to slug back a couple of beers while she was talking, but he was forced to stay away from the buffet table, mostly because Carol was speaking from right in front of it. He would have had to walk right in front of her to load up a plate with appetizers, and he was too self-conscious about it.  And he was not the only one; I didn’t see anybody eat any of the food  on the table during her presentation.  I could tell that nobody would be dropping any of those tasty apps on the ground yet, so I just planted myself next to Heather and waited patiently for Carol to call on me to add my personal perspective to her discourse on neighborhood safety. Alas, it was not to be, at least not on this hot August night. Rest assured, there will be other neighborhood meetings, and one of these days the time will come to get in my two cents.