Chloë Puts on Her Game Face

Truth be told, I am glad the Syracuse basketball season is over. Too often, I’m in the bedroom napping after my dinner when Mike interrupts my slumber by turning on the TV really loud and then punctuating the din with sudden verbal outbursts and hand gestures. Earlier this season, in fact, he got so riled up that he spilled beer all over himself and the bed. He had to stop the DVR at halftime to do laundry. Now I’ll get a little peace and quiet around here. 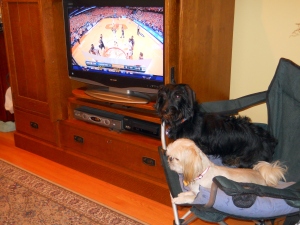 For me, the good parts of  basketball occur only when we go someplace  to watch the game or people come here. Then I get to don my special fan garb and visit my pal Penny for some wrestling. Even better than watching here is watching the game at her house, so I can check out her new toys. Penny always has the kind that talk back to you when you chew on them. I love that kind.

Chloë : Not on my watch!

For this year’s March Madness, my pal Juneau George sent me a new SU bandanna, made in Fulton, N.Y., by his sister-in-law Ando. I thank them both! I think my new scarf  is pretty spiffy, and I intend to wear it the next time I go to Heather’s office, whether there’s a game that day or not.  That’s because my “Chloë’s Picks” is running neck-and-neck with “Heather’s Bracket” in the office tournament pool. I must admit, however, that neither my enthusiasm nor my expertise were enhanced when I found out the pool has only five entries this year. And knowing Heather, if I win, she’ll give back half of my winnings for pizza money, anyway.

But pride is at stake, too. Even though my longshot pick of the Albany Great Danes went out early, all of my Final Four teams are still playing. As 16 teams march on to the championship game without the Orange, I must continue to keep my game face on. I am told that one of the other three entrants in our pool is a horse, and I’m not losing to any horse.

I just want to get through the tournament in better shape than my buddy Bob in Juneau. He had a few too many Snausages at the pregame tailgate party.

Bob sleeps off another SU loss.

3 responses to “Chloë Puts on Her Game Face”