Chloë Gets to Work

With Mike away visiting his mom, Heather took me with her to work for a whole week. This was a good deal for me, because going to Heather’s office means a lot more treats than on an average day with Mike the Scrooge.  At Heather’s office, even the people who don’t bring their own dogs into the office seem to have treats in their desks, and they all feel obligated to give some to me every day, sometimes more than once. Have I ever turned one down? Not likely.

For poor Heather, however, having to take care of me while Mike’s away is like doing two jobs —  and Heather’s job is already like doing two jobs. I can see that as soon as we get to her office; those people don’t leave Heather alone! From my perch in the camp chair behind her desk. I must stay vigilant and guard her, or people would never let her alone.  Trust me on this.

Chloë helps Tara on the trail.

Still, there are always highlights when I visit Heather’s office, and this time was no exception. The first day at work was actually spent out at my foothills getaway in Issaquah, where my friend Tara lives with Heather’s boss. There was a big company powwow out there, and because I can be such a good dog when I want to be, I got to sit in and watch the whole thing from my chair. Most of it was pretty boring (I fell asleep a lot), but I perked up when Heather told everybody that she wasn’t going to retire until she hits 70.  They gasped, but I just hoped she was not talking dog years.

In a whole week, I got to observe several other meetings, scarfed up some leftovers from the Seahawks pizza party before the Super Bowl, found a new walking path in the woods around the office park out back, and even played some doggie frisbee with my office buddy Jaeger. I even let Jaeger slobber over Hurby for a while. But the best moment at work came when Heather took me  to the second floor while she talked to somebody. Another person who works up there was out for the day, leaving his office dark and empty, with unguarded access to a leftover Starbucks pastry in his garbage can! Mmmmmmm! Score another one for this smart and nosy girl! 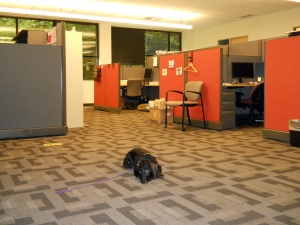 Even though going to work with Heather was more exciting than my average day with Mike, I was really glad when Mike got back from his trip, so I jumped him for about 10 minutes.  Although Heather pampers me with KFC leftovers and sleeping late on weekends, I can’t keep up with her crazy schedule when she’s working. I miss much too much beauty sleep during the day, and God knows I’ll need it when we finally get to those golden retirement years.

This entry was posted in A Dog's Life, Chloë's Excellent Adventures, Work. Bookmark the permalink.

5 responses to “Chloë Gets to Work”