You remember my buddy Penny, seen below when she had that awful haircut: 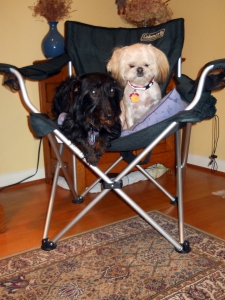 Penny went away for the summer, to the Adirondacks in New York state. Why she would want to suffer in high summer heat and humidity when she could be enjoying the pleasant weather out here, I don’t know. I guess when you’re a dog, you do what you’re told, or you don’t last very long.  That’s the bottom line.  I’ll see her in September, but I regret that she has to read the  latest news about Smiley here on my blog before I have a chance to tell her about it face to face (or nose to butt, as the case may be).

Chloë and Smiley in better times

Penny gave Smiley to me as a present last Christmas, and Smiley has been among my favorite toys ever since. The versatile Smiley can be a squeak toy and a fetch toy and a chew toy and a tug toy, all in one. In toys, as in insurance, the combo is the way to go. Unfortunately, my dear Smiley is now a broken man, broken in many places. It has gotten to the point where no one can be sure how much longer Smiley will survive.

But I do not want to give up on Smiley and just rip the stuffing right out of him, wiping that damn smile off his face once and for all. Alas,  I couldn’t let it end that way. Not until I can finally yank Smiley’s ears off, anyway. 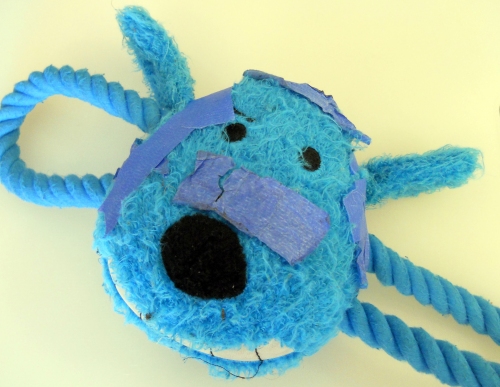 So I begged Mike to fix Smiley, and he said he’d do the best he could. So far, Mike has applied blue painter’s tape (the closest to Smiley’s natural color) to his face and skull on at least four occasions. The first few fixes didn’t hold, and Smiley’s injuries spread. However, poor Smiley never once lost his sense of humor or even grimaced when he had to face surgery again and again. While Smiley stood fast, however, I feared the worst. Sometimes Mike was forced to scoop up Smiley’s stuffing from the carpet, grab him from my embrace and take him to the operating room for more surgery, sometimes keeping him overnight. I suffered without him. 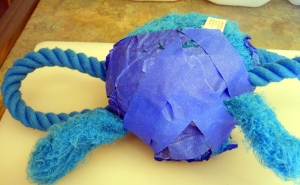 Luckily, Smiley’s latest layer of adhesive binding is holding so far, and I have my fingers crossed. As of now, Smiley lives for another day. He is back in full service, tugging, fetching and even squeaking if you pound on him hard enough. He is still making my life more fun and more secure. He is one tough little guy.

Sadly, Smiley’s long-term prognosis is not good. We all know that. But it’s important to keep Smiley going as long as we possibly can. It’s the least we can do for one who has given so much. 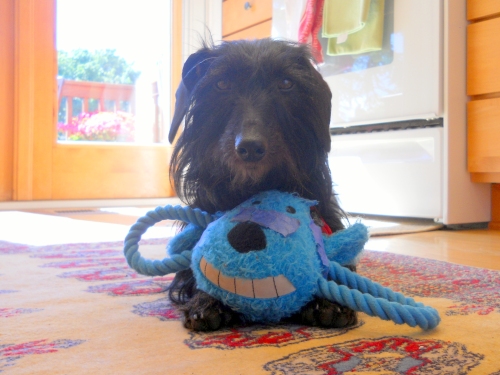 Chloë and Smiley share a quiet moment on a sunny afternoon.

This entry was posted in A Dog's Life, Chloë's Excellent Adventures and tagged dog toys, wirehair dachshund. Bookmark the permalink.

One response to “Chloë Resurrects Smiley”