My ball-playing skills have evolved steadily. First I learned to chase a ball, sprinting to catch up to it but never trying to pick it up or bring it back. Then I conquered fetch, chasing the ball down, grabbing it in my mouth and bringing it back where it started. I’m even getting pretty good at dropping the ball in the vicinity of the person who threw it. I’ve been known to do it 30 times or more at a stretch.

And now, a third way to play with my ball: Catch. In this game, I chase after a thrown ball, bring it back part of the way, and then stop and “throw” it the rest of the way back. Well, I call it “throwing,” but to Felix Hernandez it probably looks more like a push and a roll. That’s why catch is much better when played on an incline, with Mike downhill from me.

In fact, Mike has developed a catch “court” at the north end of the parade ground, on the road below the headquarters building. Mike cleared away all the brush and grass in this section of road, so he can throw the ball uphill to me, I can catch it and roll it back to him unimpeded. Then he picks it up and flips it back to me while keeping both eyes peeled for the bicyclists who come whizzing downhill. Some of those guys in Lycra and Spandex suits fly by pretty quickly, so I stay out of their way, and vice versa. We haven’t had a mishap yet.

Once I get into the groove of playing catch, it takes much less physical effort on my part than either chase or fetch do, because I do less running and more watching as the ball rolls gently downhill instead of me having to carry it to Mike. With less exertion, catch is a fun game that I’ll be able to play pretty much all my life, like people play golf. I mean, I’m pretty limber and tireless these days, but let’s face it: This won’t last forever. I’ll need a good, less demanding physical activity for my elder years. I get tired just thinking about it.

These photos and video illustrate how playing catch game works. First Mike throws the ball uphill, but since he couldn’t throw the ball and take a photo at the same time, you’ll just have to imagine that part. Those who remember Mike as the erstwhile southpaw for the All-Night Egg-Plant, Smokey’s Grill, and other teams in the Syracuse City Rec Slow-Pitch Softball League can verify that Mike was quite the hurler in his day. But I digress. And so did Mike, by the way. In any case, just imagine Mike has tossed a hard grounder my way, and I have caught it, run a few feet toward him, and with a flick of my neck thrown the ball out of my mouth and in a downhill direction, like you see above.

Then the ball rolls down the hill toward Mike and stops at a barrier of grass and dirt at his feet, where he can pick it up and toss it back to me. Ad nauseum. 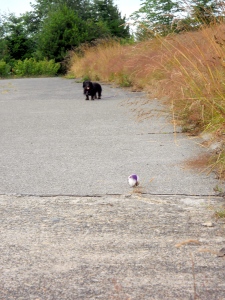 I’m getting pretty good at stopping Mike’s throws, but every once in a while I take one on the chin, so to speak. And those Visi-Balls are damn hard; if I catch one square in my mouth, it can rattle my teeth!  Therefore,  I’ve been perfecting a fielding method in which I first knock the ball down with my body, then grab it with my mouth and run it a bit closer to Mike before throwing, building some momentum. Sometimes, however, I get swept away in the moment, and I’ve just got to pluck that sphere right out of the air, like I’m a shortstop going deep into the hole. Ozzie Smith is my idol, so you guys can call me the “Wizard of Ahs.” Check out my SportsCenter style as I pull in this high bouncer and rifle a throw to home plate to nip the runner.

Anyone for a Chloë’s Catch Court Fantasy League?

One response to “Chloë Learns to Play Catch”