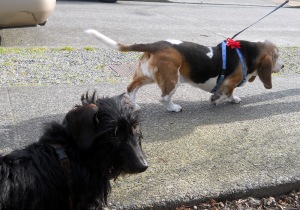 My Valentine’s Day got off to a great start when a card from my friends Grace (the basset hound down the street) and Jane (the nice person who lives with her) dropped through our mail slot. I didn’t know the mailman came so early (and he doesn’t, but that’s another story). Grace and Jane are so thoughtful! Unfortunately, it was the only V-day card I got. In fact, I was particularly disappointed that the only words referring to me that came from my Aunt Susie came in this email to Mike: “Just got back from Heid’s (the famed hot dog drive-in near Syracuse).  February is 2-for-1 month.” Sigh. And I thought she liked me. 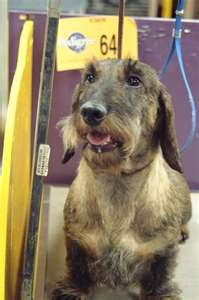 Heather and Mike did much better. Heather gave out extra cheesy treats on our morning walk, and Mike gave me a really big, overstuffed frozen PBB (Peanut Butter Boney). Then they let me stay up late to watch the finals of the Westminster Kennel Club Dog Show on TV; after all, a wirehair dachshund named Cinders won the hound group and made the final Best in Show competition. I thought Cinders is a fine representation of our breed; in terms of the classic look, he is everything I am not. (I more than make up for it with my innate cuteness and superior intelligence, of course.) It’s hard to believe Cinders lost to a mop. What a travesty.

After they finished their romantic V-day dinner, Mike and Heather gave me more treats: two ice-cream plates and the roasting pan from their shepherd’s pie that I could lick clean and push around the kitchen. What a late-breaking bonus.

It seems to me that as long as Mike keeps giving Heather some kind of special dinner and dessert on Valentine’s Day, I’m going to benefit, too. Even without any dollar-store greeting cards, this is another holiday I can endorse without question. Bon apetit.

One response to “Chloë Celebrates Valentine’s Day in Style”