We had just come home from a walk in the park when it caught my eye. It was far away, but first my nose and then my eyes zeroed in on it. 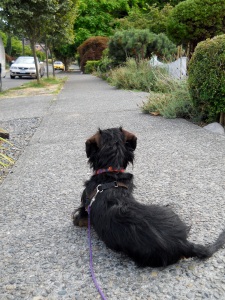 Chloë spies something down the street.

It was the Bartons’ cat.  I don’t know its name, or even if it’s male or female, but I don’t like cats on general principles, end of story. This cat is always hiding out underneath the canopy of the Japanese maple that hangs over the sidewalk, and normally it’s not this bold in broad daylight. But there it was, lying there on the sidewalk, steering right back at me. 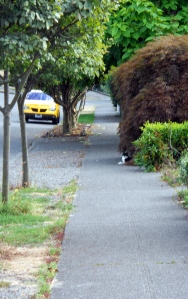 Even from far away, Chloë knew who it was.

I went into a down-stay and stared harder. Our eyes locked. My leg muscles went into standby mode. 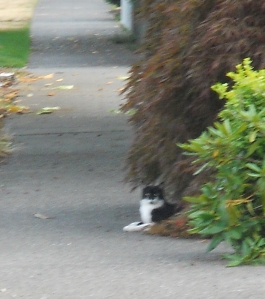 Finally she gave in and slinked away. The wuss. 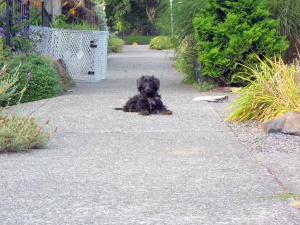 Just goes to prove, nothing gets past this guard dog. 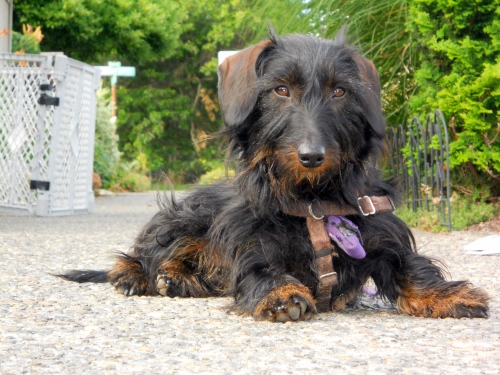 The Phantom Tollbooth of Magnolia.

This entry was posted in A Dog's Life, Cats and Dogs, Chloë's Excellent Adventures and tagged cats and dogs, dachshund, wirehair dachshund. Bookmark the permalink.

4 responses to “Chloë Wins a Standoff on 43rd Avenue West”