Chloë Learns a Thing or Two

Chloë chills in the after-dinner sunlight.

My first day at puppy kindergarten went well enough. Playing with those puppies was OK, but it’s tame compared to playing with my brothers Frank and Stanley. The homework is brutal, but it can be rewarding: Lots of treats involved. Click, treat. Click, treat. Then they try to wean you off treats, substituting toys and praise. Fat chance. Pale substitutes for the real thing, if you ask me.

So am I learning anything? Well, last Saturday, when Mike and Heather had tickets for the Mariners game, they were going to leave me at home in the kitchen–alone–for about four hours, maybe  more.

Not on my watch. Luckily, I have quickly learned how to manipulate Heather and Mike. 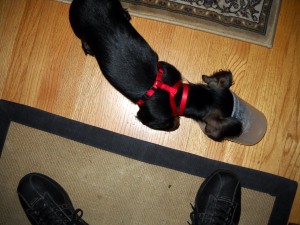 Frankly, it wasn’t that hard. On Saturday morning, I tricked Heather into grabbing me under my belly, inducing some dry heaves and a sudden and total elimination of my bowels– I dumped in the living room, for maximum effect. I could tell it really caught them by surprise.  Then I continued to act “off” all day; well, maybe the tiny pieces of plastic container I ate had something to do with it (well, there was a coat of feta cheese in it when I started).

I refused to take a walk or do much of anything but sleep. Then I dug my nose under extra blankets, making my nose feel dry and hot, knowing full well that barometer was the first thing Heather would check. Later, when I expressed no interest in pooping or even in eating (this was the hardest part, of course), I had them convincedsomething was wrong, very wrong. In a Seattle minute, they decided to stay home and skip the Mariners game (later, in  a strange coincidence, so did Ken Griffey, Jr.!). 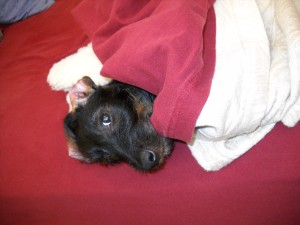 The next thing I knew, Heather was picking up her sick little darling and heading for the bedroom. And there I was, curled up with her in bed, under the covers and napping contentedly. In union, we snored gently.

I must confess: Not in my wildest dreams could I have ever imagined such a favorable outcome of my little plan!

Later, Heather vowed that letting me into bed was just a “one-time” thing because I wasn’t feeling well. But let’s face it: You can’t close the barn door after the horses are gone.

That night, the Mariners blew their lead and the game, which went into extra innings.  They really didn’t regret not being there. By that time, however, I had already made a miraculous and full recovery. Once again, I was playing madly, running around, eating and pooping with my normal gusto. They were relieved; I was…comfortable. And more than a litle smug.

A couple of days later, Heather went off to a company presentation at a swanky resort hotel, while Mike and I stayed back at the ranch. I’m sure Heather thought Mike made me sleep in my crate every night. What she don’t know won’t hurt her, I guess. 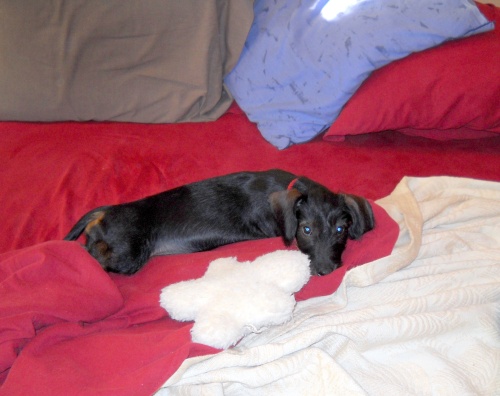 This entry was posted in A Dog's Life, Milestones and tagged Chloë the Wirehaired Dachshund, training, wiener dog. Bookmark the permalink.

One response to “Chloë Learns a Thing or Two”